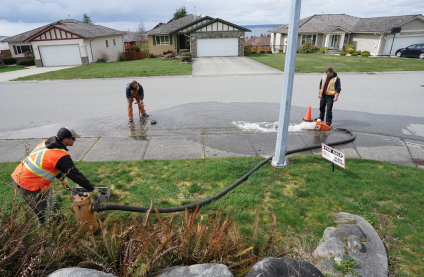 POWELL RIVER, B.C. – The City of Powell River is going to be launching a new program to protect and maintain its infrastructure.

A water main flushing program will run from June 4th until June 29th, 2018.

According to a notice from the city, it’s an “integral part of an approach to protecting and enhancing the quality and safety of the city’s drinking water.”

Flushing quickly removes water from the city’s piping system, and uses water velocity to source out unwanted materials that build up in the pipes.

“Water pipes are usually flushed by opening fire hydrants, where the discharged water is directed through a diffuser, which is designed to remove chlorine and control the flow of water to reduce erosion,” said Public Works Superintendent Murray Steer, in the notice.

“The city uses a procedure known as unidirectional flushing, which is superior to traditional flushing techniques, because it allows crews to direct the flow of water and isolate specific sections of pipe, creating more efficient scouring and using less water,” he explained.

Periodic flushing of the pipes helps removes sediment and other materials that have built up in the pipes.

The program is planned to be done annually.

The plan is to flush the whole system in the Townsite area. Flushing is scheduled between 8:00 a.m. and 4:00 p.m. Monday through Friday.

It takes about 30 minutes to flush each hydrant.

Residents are being advised that during the flushing, they may notice discolored water or a drop in water pressure. The city said that problems should be minimal.

Residents are asked to limit water use while crews are flushing in their area.

It is also recommended that the water should not be used for about two hours after the flushing. This allows time for the sediment to settle.

Once those two hours are up, residents can run a cold faucet for about five minutes to make sure the water is clear.

Any questions or concerns can be directed to the City of Powell River’s Public Works Department at (604) 485-8657.