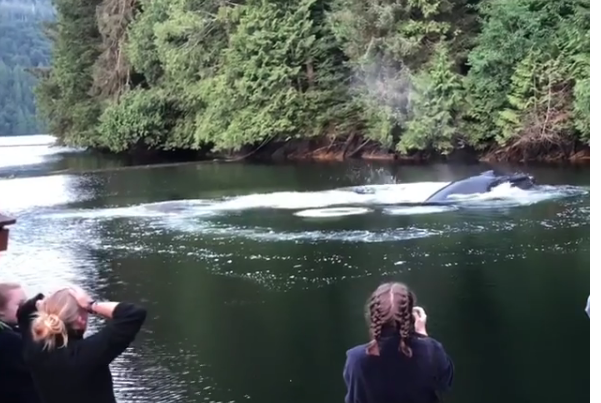 PORT HARDY, B.C. – It was a moment in time that a lucky few at Port Hardy’s Great Bear Lodge will never forget.

A group of humpback whales were seen swimming around the docks at the lodge at around 6:00 a.m. on Saturday, Aug. 4.

“It was a pretty amazing experience,” Wear said. “I have never seen whales that close and I don’t think anyone at the lodge since it’s been operating has (either). It was pretty magical to see them come so close to the lodge.”

Wear estimated that the whales were about 10 metres away from the docks when they surfaced.

Co-owner of the Great Bear Lodge, Marg Leehane, shot a video, which can be seen through the lodge’s Instagram page.

The video has since been viewed over two million times, and shows Shaw excitedly pointing out the whales to visitors.

“That particular day was definitely a once-in-a-lifetime thing,” Shaw said. “We were in the right place in the right time. We’ve seen humpback whales bubble net feeding in this inlet before but we’ve never seen whales that close to the lodge, especially not doing that behaviour so that was something that was very unique.”

About five staff and eight guests saw the whales.