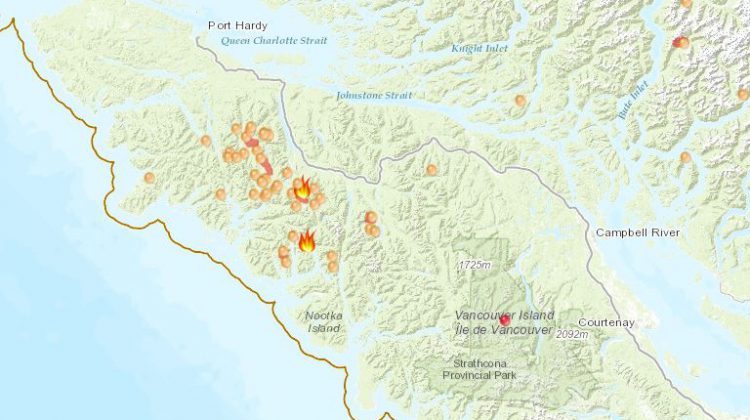 Screen shot of the B.C Wildfire interactive map, Sept. 03/2018
VANCOUVER ISLAND, B.C. – Mother Nature has been the culprit in starting most of the wildfires burning across northern Vancouver Island over the late summer.
Lightning has caused the majority of the 76 fires that have started since Aug. 11 in the region north of Campbell River.
“There was only one that I know of that was human caused,” said BC Wildfire information officer Lynne Wheeler.
According to Wheeler, wildfires have ripped through 6,670 hectares in northern Vancouver Island, and 55 wildfires remain active.
Meanwhile, late summer rain and cooler temperatures is helping to reduce fire behaviour and allowing crews to get a handle on the wildfires in the region, Wheeler noted.
“The forecast that we heard this morning was calling for significant rain by the end of the week,” Wheeler said. “It definitely will help change the craziness around here. They have a good handle on the fires around here so it’s all going to get better from here.”
Fires of note in the region include:
Gold Valley Main fire near Zeballos
Sitting at 168 hectares, the fire is still out of control.
There is good news, in that the hydro lines in the area are no longer under threat.
“We did manage to put some crews up top and build a heli-pad over the mountain to start trying to do direct attacks (on the wildfire),” Wheeler said. “And also, they’re still bucketing with the helicopter.”
Pinder Creek Fire, north of Zeballos
The fire is 260 hectares and remains out of control.
It’s not growing which is good news, according to Wheeler, and crews are working to get containment.
“They’ve managed to keep the fire inside the guards that they’ve built,” she added. “At this point it’s looking good.”
There are 16 firefighters assigned to the fire today (Tuesday), along with one helicopter.
“They’re doing a good job, they’re making good progress (but) one of their challenges is that there’s a lot of unworkable ground that’s too steep to put crews into, but the rain helped significantly to reduce the fire behaviour,” Wheeler said.
Larry Lake fire, north of Port Alice
The 20-hectare wildfire is 100 percent contained. It’s being monitored but no firefighters have been assigned to the region.
East Redonda Island fire
The wildfire almost doubled in size over the weekend, from 110 hectares on Thursday to 200 hectares today.
BC Wildfire information officer Dorothy Jakobsen said the wildfire is in an ecological reserve and is behind the control line.
There are crews working to maintain the control line today.
It continues to be a  “modified response fire,” meaning the land manager – in this case BC Parks – has a management objective of allowing the fire to burn, rather than to allow fire suppression activities which could damage the area’s ecosystem.
The fire started Aug. 24. It’s suspected that it may have been human caused, but is still under investigation.
East Redonda Island is located on the west side of Homfray Channel, north of Desolation Sound Marine Park.
Ecological reserves are areas in B.C. selected to preserve representative and special natural ecosystems, plant and animal species, features, and phenomena.