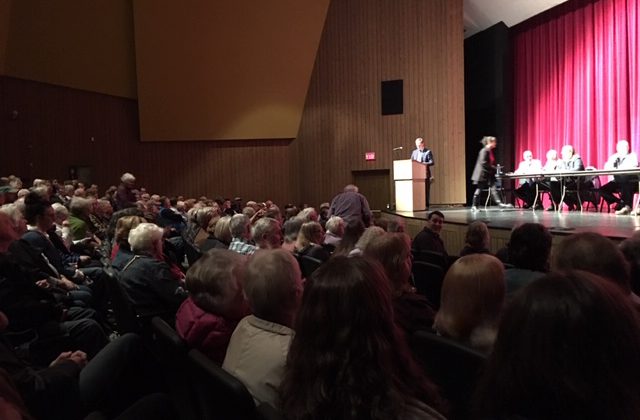 The Powell River Chamber of Commerce hosted the forum.

“They had to open up the back area, which from my understanding they haven’t had to over the last two all-candidates meetings that have happened there, so definitely some added interest this year,” said Chamber President Cory Carr.

He estimated there was close to or even more than 300 people at the venue.

Carr noted that there were two major topics that attracted discussion.

“Definitely the Inn at Westview was a major issue and was brought up a couple of times in sort of different ways in terms of bylaws or also what could have been done differently and what could we do from here, that was definitely interesting and a key item for a lot of people,” Carr explained.

“Another item was sewage treatment. I was glad that those items were addressed because you could tell that a lot of people were thinking the same thing.”

Carr said overall, the event was a great success.

“We (the chamber) were very glad to be a part of the event, it was definitely a great turnout and the city did their best with expanding the room and fitting everyone in. Everybody had a chance afterwards to hang out, ask extra questions and just get that face to face time with candidates,” he said.

Voters head to the polls for the municipal election on October 20th.