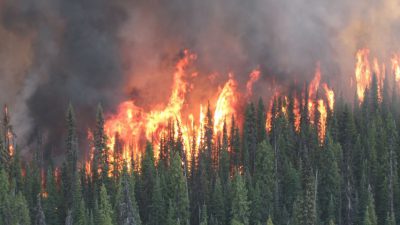 POWELL RIVER, B.C. – The qathet Regional District and City of Powell River are working to make the community more resilient to wildfires.

This winter, they will be focused on mitigating the wildfire concern within 34 hectares of the Penticton Trails.

This work will involve chainsaws, chippers, and other equipment to remove the high levels of fuels that become a fire hazard during the summer months.

The goal is making this forested park and trail system safer.

The project, expected to start in early 2019, went through a request for proposals, which are currently being reviewed.

“We haven’t exactly selected the contractors who will be working with on this project,” said the district’s manager of emergency services Ryan Thoms.

“We’ll see where that will go; we’ve allocated that in our budget. We’re reviewing right now with the intent to hopefully catch the remainder of the winter window to get most or all of this work done.”

Thoms said there is growing concern across B.C. about the growing wildfire threat.

“The last couple of summers certainly reconfirmed that for us,” Thoms said. “We’re no different here in the quathet region.”

“That led to many recommendations, and certainly one one of them was looking at priority areas around the region, where we see difficult or concerning fuel accumulations in fire areas adjacent or near some of our denser populations,” Thoms said.

The Penticton Trails were chosen as the first project simply because it is nearest to some of the higher density populations in the region.

Thoms said 34 hectares is “relatively small when you look at the whole region but it’s a great project to start with. We will certainly hope to (implement) more of these throughout the region as we go forward.”

During a fire season that was the worst in B.C. history, Powell River fire crews were able to catch fires before they caused any significant damage to land or structures.

“All of our fires we caught early enough,” Thoms said. “So great suppression efforts, so we’re very fortunate. That being said we had we had some very high to extreme conditions throughout much of the summer this year and with climate change we anticipate to have more these types of seasons and more of these seasons.”

While this work is being done access to the area will need to be restricted to protect worker and public safety. The remainder of the Penticton Trails system not involved in this fire safety project, with more than 200 hectares of forested trails will remain open for public enjoyment. Your understanding and patience is appreciated.

Thoms also reminds residents to be proactive in the winter and spring as wildfire season approaches.

“There’s no point waiting for summer to show up and then start worrying about wildfires,” Thoms said. “It’s actuallly a year-round concern and wintertime is the best time to do certain things like treating vegetation on our properties.”

Thoms said now is a great time to start pruning trees, cleaning up branches, needles and other natural elements that can act as fire accelerants.

“There’s a tremendous amount of things you can do to fire smart your property and winter is a really be doing that,” Thoms said.

Further information, including a detailed map of the project area, can be found at www.qathet.ca