VICTORIA, B.C- Farm workers in British Columbia are getting a pay raise.

According to an announcement from the provincial government, farm workers paid by piece rate will have their minimum wage go up by 11.5 per cent in the New Year.

The province stated that the increase is the same rate made to the general minimum wage back in June, and the last increase to piece rates was done in September 2017.

15 different crops are covered by piece rates, including apples, green beans, and mushrooms. A full table of changes can be found below. 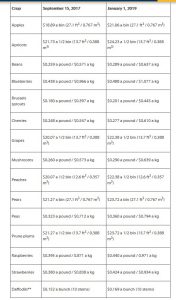 A report is also being put together by the Fair Wages Commission, in order to ensure that farm worker compensation is sustainable for farmers and fair to the workers.

Arzeena Hamir, who runs Amara Farm in the Comox Valley, believed the increase was a good move by the province.

“There is a crisis in trying to find enough workers, for farm jobs,” said Hamir.

“A price increase in wages is going to help. It’s too bad it has to be enforced by the government, but in some areas farm workers are very exploited, I guess we need to see that. I don’t find that that’s an issue in the Comox Valley, but in other areas it certainly is.”

“I think blueberries are going to be hit hard, and probably some vegetables like beans that are done at piece rates, you might start to see a price increase,” said Hamir.

“Otherwise, I think it is a good news story.”

She also thought the move might result in more mechanization on farms due to increased labour costs, and didn’t think there would be any more wage increases in the near future.