POWELL RIVER, B.C. – Powell River’s mayor and council will be voting Thursday on whether or not they will be getting a pay raise.

In five years time, each councillor’s salary would be $31,800, under the proposed bylaw. 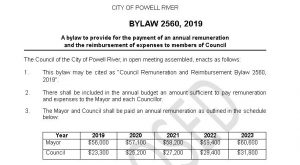 According to a city document, “the bylaw shall come into full force and effect upon adoption.”

In a report to mayor and council, Chief Financial Officer Adam Langenmaier noted that “the bylaw has been changed and the reference to an average wage in Powell River has been removed as it was difficult for a member of the public to reasonably determine what the remuneration was for Mayor and Council in any given year. To increase transparency a 5-year remuneration schedule is being included in the bylaw.”

On Jan. 31, Langenmaier told the MyPowellRiverNow.com newsroom that, prior to 2019, changes to the Canadian Income Tax Act pay received by elected officials was subject to a one-third non-taxable allowance.

“So, the federal government changed the tax treatment of elected officials taking effect in 2019,” Langenmaier said.

“One-third of their remuneration was exempt from income tax and CPP because it was considered an expense allowance that was part of their duties. So that’s no longer eligible. What you have to do is pay income tax on the whole amount.”

In short, one-third of the mayor’s and councillors’ salaries was exempt from income tax.

However, in the 2017 federal budget, the Federal Income Tax was revised to eliminate this allowance, leaving council’s remuneration fully taxable.