VANCOUVER ISLAND, B.C. – We’re on the cusp of wildfire season and there has already been 16 fires in the Coastal Fire Centre region.

And all 16 were human caused.

This is according to Coastal Fire Centre information officer Marg Drysdale, who noted that more recently, there have been a couple of fires over the past couple of days but they are “largely under control.”

The number of fires thus far exceeds last year, when there were 10 fires in the Coastal Fire region by May 6. Last year was the worst wildfire season in B.C. history.

Anyone found responsible for causing a wildfire can face hefty fines and even be charged with the entire cost of a fire. 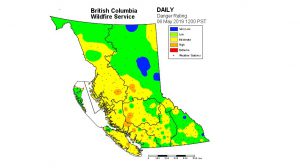 Drysdale stressed that people need to be vigilant, especially while burning plants, trees, and debris on their property.

“We really want people to pay attention to what they’re doing, particularly when they are having any backyard burning,” she said. “That’s where we’re seeing some of our problems right now. So people are actually lighting a fire, they’re burning the debris out of their yard, they’re letting it burn down, and late in the afternoon perhaps they’re going in and not paying as much attention as it starts to cool down.”

But that’s when the wind often picks up and blows on the fires, Drysdale added: “We’re seeing a few of them get away on us right now, so we really want people to be very careful in what they’re doing. They are required to monitor those fires at all times. So make sure they’re absolutely out if you are going to be stepping away.”

On April 28th, three human-caused fires broke out in the Oyster River area, just south of Campbell River. One of the fires on Macaulay Road, quickly increased in size and Oyster River Fire requested mutual aid from both Courtenay and Cumberland.

The BC Wildfire Service was also called, and they activated the valley’s emergency program just in case people needed to be evacuated.

Meanwhile, the fire risk in the Coastal Fire Centre region remains moderate but it is expected to climb a little bit before an expected cool down in temperatures next week.

“Right now, our fire weather techs are telling us that we are having hot, dry weather, and it may go to mid-20s to the middle of the week, but it looks like we may get back to seasonal temperatures by early next week,” Drysdale said.

Located in Parksville, the Coastal Fire Centre covers south coastal B.C., the most heavily populated area in the province.

This area encompasses approximately 16.5 million hectares of land, extending west of the highest point on the Coast Mountain range from the U.S./Canada border at Manning Park to the northern border of South Tweedsmuir Provincial Park, the Lower Mainland, Sunshine Coast, Vancouver Island, the Gulf Islands and Haida Gwaii.

Drivers to prepare for winter driving conditions across Vancouver Island

Drivers to prepare for winter driving conditions across Vancouver Island

BC Parks gears up for opening of camping reservations