COS asking people to be cautious after Willingdon Beach Trail reopens 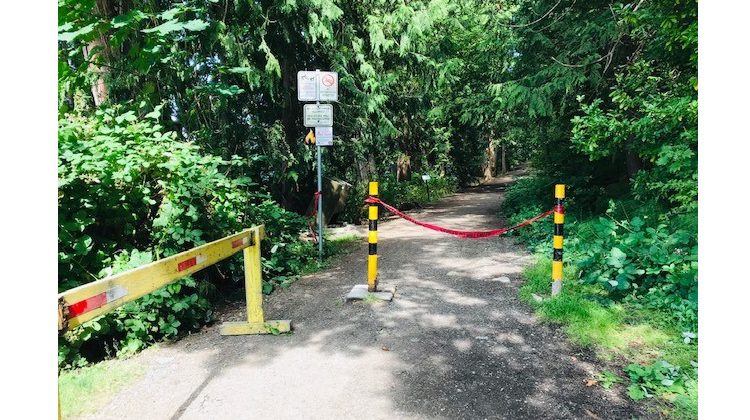 The trail closure (Supplied by the City of Powell River)

The Willingdon Beach Trail has reopened, but you’re being asked to be cautious.

This comes four days after a bear attacked two dogs there. That prompted the City of Powell River to close the trail over the weekend. Conservation Officer Service Inspector for the Lower Mainland Murray Smith says something like this doesn’t happen often.

“It’s extremely rare for bears to approach dogs. Usually it’s the opposite,” he told MyPowellRiverNow.com.

Smith says the incident happened Thursday around 5:00pm. A man was lying on the beach reading a book when his two chihuahuas started barking. A bear had made its way onto the beach as well.

Smith says the bear bit one of the dogs and then turned its attention to the other. At this point, the owner and several others tried to scare the bear away by making noises and throwing rocks at it. It refused to leave at first but eventually acquiesced.

One of the chihuahuas died. The other needed surgery but Smith wasn’t sure of its current condition. In response Conservation officers set up a trap that evening and the trail was shut down.  It stayed in place until Sunday morning but didn’t catch anything, so the officers removed it.

Murray said it’s believed the bear has left the area with no further reports about it. He added the COS will be vigilant and continue to monitor the area.

In the meantime, he’s recommending people who walk the trail keep their dogs on leashes and be bear-prepared. That means carrying bear spray or a loud air horn in case you come across one of the animals. He’s asking if anyone sees another bear there to call the COS Report All Poachers and Polluters hotline at 1-877-952-RAPP(7277).