Following a series of public events inviting people to pick their favourite new playground equipment designs, three have been chosen by City of Powell River Parks, Recreation and Culture Department.

The playground sets will be installed at DA Evans, Grief Point and Willingdon Beach parks.

“We held public input sessions at each of the parks, the Recreation Complex, and had a booth set up all weekend at Logger Sports,” said Community Recreation Program Coordinator, Shawna Rahier. “We had over 560 votes on the playgrounds, and a lot of great conversations and input from the public. Kids were especially excited when they were able to vote and have their opinions heard.”

Director Ray Boogaards also noted the involvement from the community. “This new playground equipment will be a welcomed improvement to what is available in these parks presently,” said Boogaards.

According to Boogaards, one of the department goals is to create more low cost and no cost opportunities for the residents in the city. “This new playground equipment will assist in reaching this goal,” said Boogaards.

Both Grief Point and Willingdon Beach parks will have playground sets for ages 2 to 5-years- old. DA Evans will get equipment suited to 5 to 12-years-old.

The total budget for the project is $100,513 and is funded by Powell River Community Forest with an $85,513 grant. Powell River Rotary Club is contributing $15,000 for the new equipment at Willingdon Beach. The goal is to install the playground equipment in September or October of this year.

At the Willingdon Beach site, the equipment, including a previously approved set for 5 to 12- year-old children that is currently in storage, is being installed in an archeological area. A permit is required from the BC Archeological Branch before the City can proceed.

“The permit has been approved but we are waiting for the 30-day consultation period to be completed,” said Boogaards. Grief Point Park is also known as Airplane Park because of its little red airplane that’s a landmark for many residents.

“The airplane has been at Grief Point Park for many years,” said Boogaards.

“Because of its age, the City made repairs to the airplane in 2018. In 2019 the airplane will again require repairs. Our goal is to replace the airplane at some point with something similar.” 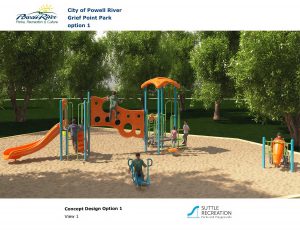 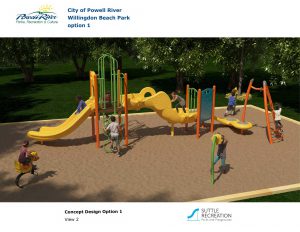