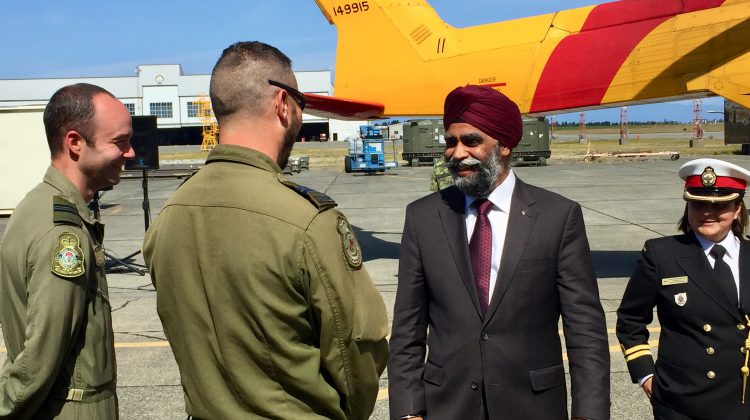 Search and rescue operations along the West Coast are getting a huge shot in the arm.

Defence minister Harjit S. Sajjan was at 19 Wing Comox on Thursday, to announce investments in the search and rescue fleet of CH-149 Cormorant helicopters.

The federal government said the investments will “ensure the women and men of the Royal Canadian Air Force (RCAF) have the equipment they need to fulfill their missions, including search and rescue (SAR) operations.”

The fleet will receive at least two additional helicopters and be upgraded to extend its life to at least 2042.

This brings the total fleet to 16 Cormorants.

Sajjan said this will ensure that search and rescue capabilities will continue to be available 24/7 throughout this project.

“We will make sure that we have the appropriate number of Cormorants available here at Comox, 9 Wing Gander, and 14 Wing Greenwood,” he said.

The project office will conduct this work with Leonardo S.p.A. in partnership with IMP Aerospace, and CAE.

The CH-149 Cormorant allows search and rescue crews to conduct operations in areas not accessible by other helicopter fleets.

Sajjan said across the more than 243,000 kilometres of coastline that includes ocean, forest, mountain, and the arctic, SAR personnel keep Canadians safe.

“You are always ready to deploy in some of the most extreme conditions on this plant,” he said. “And collectively, you do this thousands and thousands of times per year. You are a key part of keeping Canada strong at home. And you deserve the very best equipment that we can offer to help you do the important work to do the important work.” 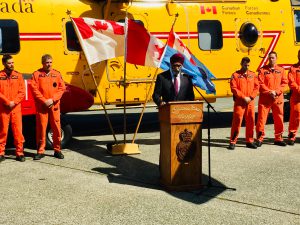 Sajjan noted that Canada’s dedicated fleet of search and rescue helicopters, the Cormorants, are being enhanced with several significant modifications.

“Modifications such as improved sensor capabilities, in-cabin wireless communication, updated navigation and new engines that will better meet the challenges of the operating environments that are so unique to Canada.”

He added that the design and airframe of the aircraft’s body.

Canada’s Industrial and Technological Benefits Policy applies to this project.

It requires the contractor, Leonardo, to undertake economic activity in Canada equal to the value of the contract.

The Cormorant Mid-Life Upgrade project has a price tag of nearly $1.4 billion.