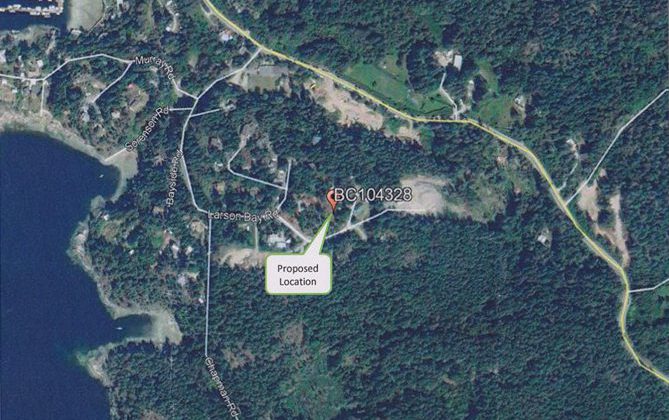 Aerial view of proposed location for a Telus cell tower in Lund. (Supplied by Telus)

A proposed cell tower in Lund is sparking concern from neighbours.

It’s also the reason behind a new group called the Concerned Citizens of Lund.

Telus says the new facility at 9561 Larson Bay Road “will improve services in Lund, areas north and south of Lund and Savory Island.”

Telus proposes to install a 35-metre tapered monopole, plus a three-metre lightning rod, with nine antennae mounted at the top of the structure.

An outdoor shelter will be located near the base.

Telus says in order to reduce the overall visibility of the structure, the proposed pole will be painted green to match the surrounding tree coverage and the antennas at the top of the pole will be mounted directly to the pole.

The proposed tower will only have capacity at this time to support Telus equipment.

“There’s got to be a better spot for this thing that provides the service but has less impact on the citizens of our neighbourhood and provides greater benefit to the community.”

Lennox says Telus is “taking the cheap and easy way out by pitting neighbour against neighbour” instead of finding a location that works for everyone.

The tower will be built 150 feet from several homes, some of which are in the direct sightlines to the ocean, Lennox said.

He said the group’s goal is to tell people what’s happening with the tower.

“Most people don’t know what the issue is or even what’s happening in their neighbourhood and also to look for an alternate location.”

Lennox said he understands the need for better service in the village but adds that the group cannot accept the installation of this magnitude in this location.

“We’re not opposed to the service but we know there are alternatives that will better suit the citizens and benefit everyone,” he added. “We’ve had several people come forward with proposed alternate options. Unfortunately, we’re the ones that have to try to get that process to happen instead of Telus.”

Lennox said once an installation is approved and installed, it becomes the de facto point for future infrastructure improvements in the area and therefore becomes the hub of telecommunications.

Other concerns include health impacts and how the tower will affect property values.

The group is manning a community information booth this Sunday at the Lund Community Centre. They’ll be there from 10:00 am to 2:00pm.

“We welcome people to come and understand the issue and be involved. Unfortunately, the awareness requirements under the process are very thin and our group has ended up being the mechanism by which the citizens can understand the issue,” Lennox said.

The facility is in the proposal stage.