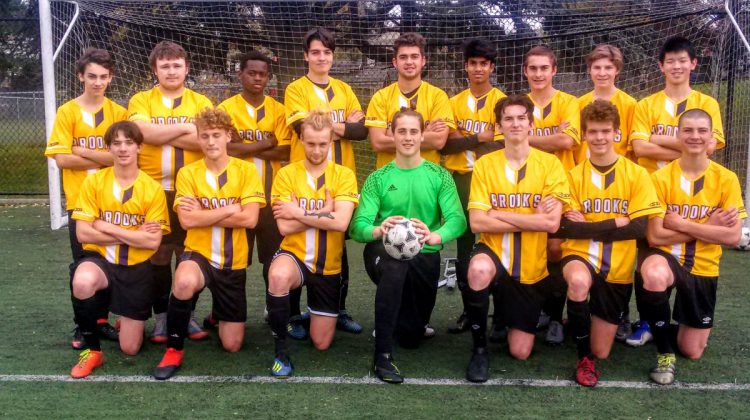 Photo of the Brooks Secondary School's senior boys soccer team that will be heading to Burnaby to compete next week.( Provided by Tony Rice.)

The senior boys’ soccer team at Brooks Secondary School will be heading to Burnaby next week for a chance to win a provincial championship.

The team won both its games at the Island Championships last week sending them to the provincial tournament.

Head coach of the team, Tony Rice says it’s a big deal for the players and the school as it’s only the second time in history a boys team has made it to the provincial championship.

“We finished fourth at Islands which qualified us for the tournament and it was a bit of an upset for us to get that result. It’s only the second time in Brooks’ history as a senior high that a boys team has qualified for the provincial tournament, so it’s quite a big deal” said Rice.

The tournament will have 16 teams competing this year in the two-day event. Rice says Brooke’s opponents are going to be quite difficult to beat.

“We’re in a bit of a group of death. We have Sah-Hali from Kamloops. We have Langley Fundamental – who are the defending champions- and we have Windsor from North Vancouver.”

He says the main goal for the team is to finish above where they are currently ranked, and put a few more goals in the back of the net.

“I think were seeded 15th out of 16 and I think that’s probably based more on the fact that nobody knows who we are, so we feel comfortable in that role.”

“I think we’ll just get into the games and do as well as we can. We’re obviously in it to win it but we’ll have some goals as we go through and I think we’ve surprised people all year and we wouldn’t be expecting anything different at this tournament too. Anyone that overlooks us and takes us for granted will probably feel like a couple of teams on the island whose seasons are over now,” Rice added.

The seniors head out for the AA High School Provincial Championships in Burnaby this Monday.