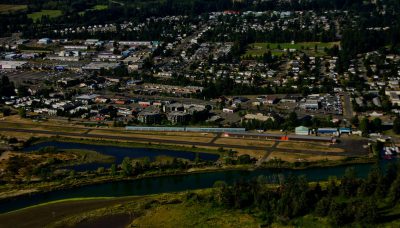 A aerial view of eastern Courtenay, with the airpark visible next to the Courtenay River estuary on August 6th, 2018. (Vista stock photo)

A Comox Valley man in his 70s died in a plane crash Saturday, near Sydney Inlet Provincial Park northwest of Tofino.

Andy Watson, communications manager with the BC Coroners Service said the service “is investigating to determine how, where, when and by what means he came to his unexpected death.”

“I have no other details to share at this early stage of our fact-finding investigation,” Watson said.

Due to the privacy of the deceased, the BC Coroners Service does not confirm or release (his) identity.”

The Tofino RCMP says the airplane was scheduled to land in Courtenay Saturday afternoon.

“On December 21st shortly after 4:00pm the Comox Valley RCMP were made aware of a plane that was overdue for an anticipated arrival at the Courtenay BC airpark. This plane was scheduled to land at approximately 1:30pm. Contact was made to several Vancouver Island airports, however, they did not turn up the missing airplane.”

It added that a crash site was located north-west of Hot Springs Cove, near Sydney Inlet Provincial Park.

Members from the 442 Transport and Rescue Squadron out of Comox were called to the site by the Joint Rescue Co-ordination Centre and confirmed it was the missing plane.

The Tofino RCMP says members have not been able to attend the scene because of the remoteness of the site.

It added that no other information on the incident will be released at this time and will provide updates once more details are available.