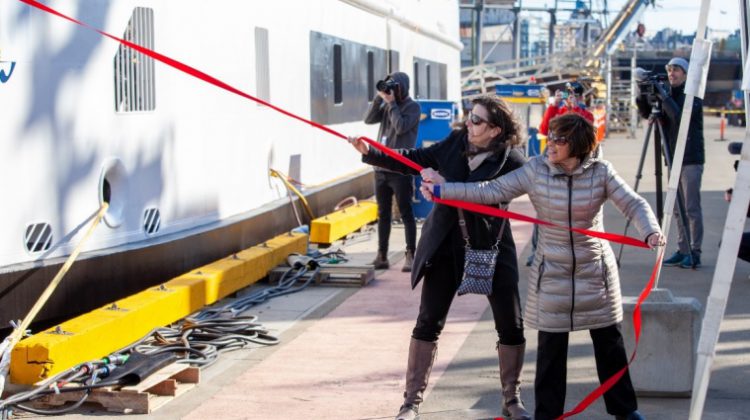 Co-sponsors Sandy Leduc (BC Ferries, left) and Sandy McCormick (Texada Island, right) pulling a ribbon that smashes a bottle of champagne against the hull of Island Discovery to christen the vessel (Photo supplied by: BC Ferries)

“These ships will connect communities literally and figuratively when they enter service later this year,” says BC Ferries President and CEO Mark Collins. “We are grateful to have such upstanding members of the BC Ferries family and the vessels’ homeport communities bestow the ships with good luck and protection.”

In keeping with maritime tradition, BC Ferries selected sponsors to bestow them with good luck and protection for all those who travel on them.

Each ship has a community sponsor and a sponsor from the BC Ferries family.

The first of the new vessels, Island Discovery, will be deployed on the Powell River – Texada Island route, replacing the 59-year old North Island Princess.

Depending on configuration, Island Class Ferries will be able to carry between 300 and 450 passengers and crew along with around 47 vehicles.

They’re battery-equipped and are designed for future full electric operation, fitted with hybrid technology that bridges the gap until shore charging infrastructure and funding becomes available in B.C.

Partial funding was provided by the federal government through the Provincial-Territorial Infrastructure Component – National and Regional Projects.

BC Ferries plans to hold events to celebrate the ferries’ introduction into service with both employees and the local communities.