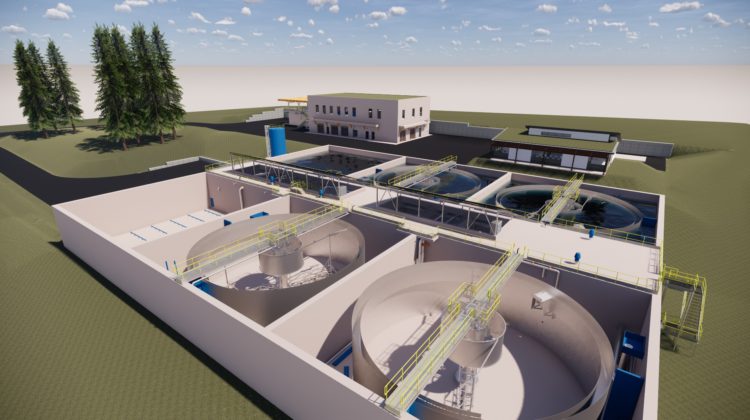 The City of Powell River has unveiled its borrowing strategy to pay for its new Consolidated Wastewater Treatment Plant.

It has approved a temporary borrowing bylaw to fund costs associated with the $76 million plant.

Construction is underway near First Beach right now of the plant – which the city says “will significantly improve how we treat our wastewater, and minimize our human impact on the marine environment” – and won’t stop until 2022.

The plant is taking shape with the start of the outfall.

The city will only pay interest on money borrowed from the Municipal Finance Authority (MFA) under the bylaw and will not pay any interest or fees to enact it.

The city says continuing to secure funding for the plant semi-annually “is slow, not as flexible and requires cash requests to be made several months prior to receipt, which could leave the city with a cash surplus or shortage.”

“I think this is a fiscally responsible way to deal with borrowing,” said Councillor George Doubt, who chairs the city’s finance committee.

“The City will only borrow cash that is needed for expenses that are imminent and known, making us able to reduce the amount of time that borrowed cash is being held. By doing that we will be deferring interest payments on surplus cash. We can borrow at very attractive interest rates and convert to long-term borrowing at an appropriate time.”

The city says this approved temporary borrowing strategy facilitates cash flow, similar to a line of credit, “where interest is only paid on the balance of cash borrowed until the loan is either paid off or converted to long-term debt.”

The cash that is borrowed is charged daily interest at the MFA’s variable interest rate.

As of Feb. 19th, the 10-year long-term MFA interest rate is 1.68 percent while the daily variable interest rate that would be charged on temporary borrowing is 0.90 per cent.

Once the City has taken on temporary borrowing, it can then convert the borrowing to long-term debt, secure the interest rate, and start the 30-year payment process.

The maximum that can be borrowed is limited to the maximum amount remaining under the loan authorization bylaw which is currently $17,280,000.

At the completion of the project, the City says it “will be in a better position to assess cash reserves and outstanding debt, and to decide how much of the debt the City is able to pay down prior to locking it in for the long-term.”

We have reached out to the city to find out how this borrowing bylaw impacts taxpayers.