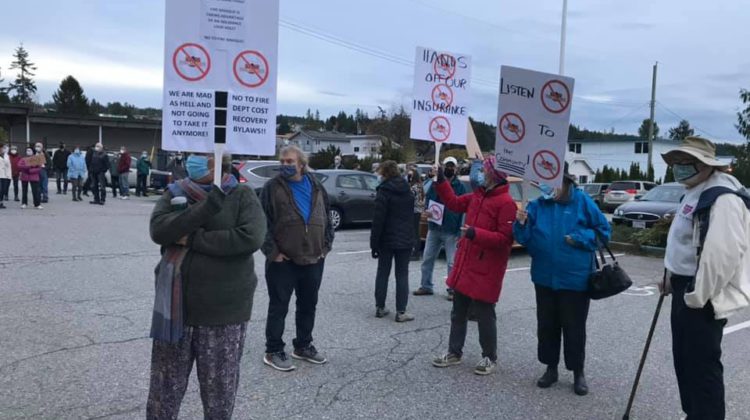 In a unanimous vote, City Council has voted against a motion to enter into an agreement with Fire Marque, a company that claims to recover the cost of fighting fires from the owner’s insurance carrier.

Up to 100 people rallied outside council chambers prior to last night’s council meeting. Prior to that, a petition was circulating, and letters from concerned residents were sent to the Mayor and council.

Fire Marque is already operating in other cities. In documents presented to council, the company says some insurance policies already charge a premium for firefighting cost recovery. It works as a sort of “middle man” to bill the insurance companies for those costs, on behalf of municipalities. It charges 30% for its services.

City staff drafted a cost schedule, and wording for the necessary bylaws that would need to be added or amended to move forward with the scheme.

But Powell River residents expressed concern that the scheme would punish the victims of structure fire, making future insurance difficult or more expensive to obtain. Others added that residents already pay for firefighting costs, as part of their property taxes. The scheme would therefore unfairly “double charge” victims of fire.

Among the letters to council, Credit Union Insurance Services Association  Executive Director Dave Jevons pointed to a court case in Ontario* where the insurer refused to pay a Fire Marque invoice and it was added to the victim’s property taxes. The Township and Fire Marque lost the case in the Ontario appeals court.