BC Ferries presents Queen of Burnaby plaque to City of Burnaby 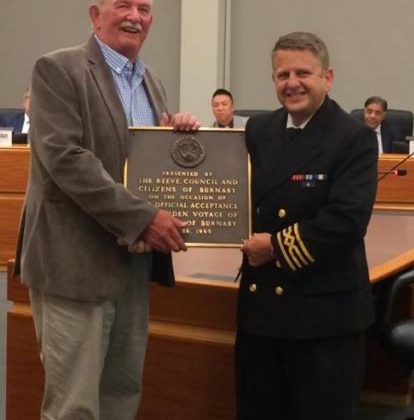 A plaque from the old Comox – Powell River ferry has been presented to its namesake city.

The plaque that hung across from the Chief Steward’s office has been presented to the City of Burnaby.

BC Ferries spokesperson Darin Guenette says it’s a way to honour the service life of the vessel.

“What we certainly have heard is that there are customers, people who live in and [around] the Islands that we serve that have a history with these vessels, so we hear this rich interest in ‘wow, when I was a kid I remember going out to the Islands and I got to run around the deck and meet the captain’. Now it’s 30-40 years later so there’s a connection between our customers and these vessels.”

The Queen of Burnaby was retired from the BC Ferries fleet in May after 52 years of service, including spending its last 16 years on the Comox – Powell River run.