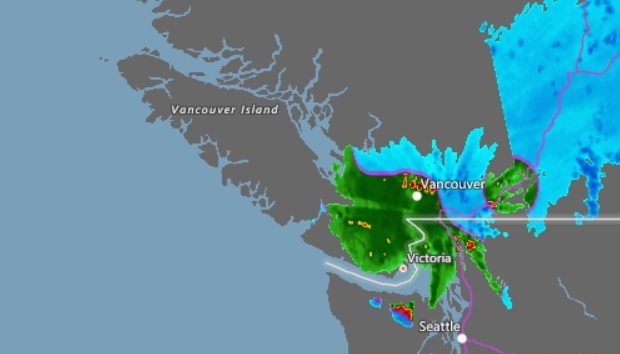 POWELL RIVER, B.C.- Mother Nature is making her mark on parts of Vancouver Island and the Sunshine Coast.

Environment Canada noted that the centre of the low pressure system that’s responsible for much of the snow on lower parts of the Island is riding in between British Columbia and Washington.

“When we have a low pressure system that actually makes contact with the land, and we are on the north side of it, we’re dealing with the cold side, hence all the snow,” said meteorologist Armel Castellan.

“If the winds are primarily east and north-east, the east side of Vancouver Island is gonna see an up-slope and therefore there will be a much bigger effect of that precipitation, whereas the Sunshine Coast will see more of a down-slope effect.”

Castellan said northern parts of Vancouver Island and the Sunshine Coast have been able to avoid the snow that’s hit the south Island.

“Down in Powell River for the moment, we’re just at two degrees.”

“At this point, Campbell River and Comox are still (seeing) rain. Those places are not going to be as badly affected by this storm because it’s further south than (they are),” he said.

Castellan said looking towards the rest of the week, areas like Powell River and Campbell River might not see any snow at all.

“The way the pressure patterns line up on Thursday is very interesting,” he said.

“You’ll have high pressure over the mainland and low pressure off-shore so you’re gonna see a lot of the Arctic front kind of move closer and closer to the coast.”

He said there’s not going to be a storm associated with that high pressure system, but it will bring cold winds.

“Just having those cold winds go over Georgia Strait, pick up moisture because it’s relatively warm water compared to the cold, it’s going to look a lot like what we see in the Great Lakes of Canada in the east,” he said.

Castellan said this could bring in what they call “sea effect snow”.

“So places along the east side of Vancouver Island, traditionally, Nanaimo is a great area to have this effect, and Parksville, Gabriola (Island), maybe even as far north as Bowser. Those areas could see this sea effect snow.”

“Some places could see accumulating snow again on Thursday, whereas just a few kilometres south or north of those spots would see absolutely nothing, so it’s going to be very spotty.”

Environment Canada is calling for highs of 3 to 4 degrees on north Vancouver Island and in Powell River over the next few days.