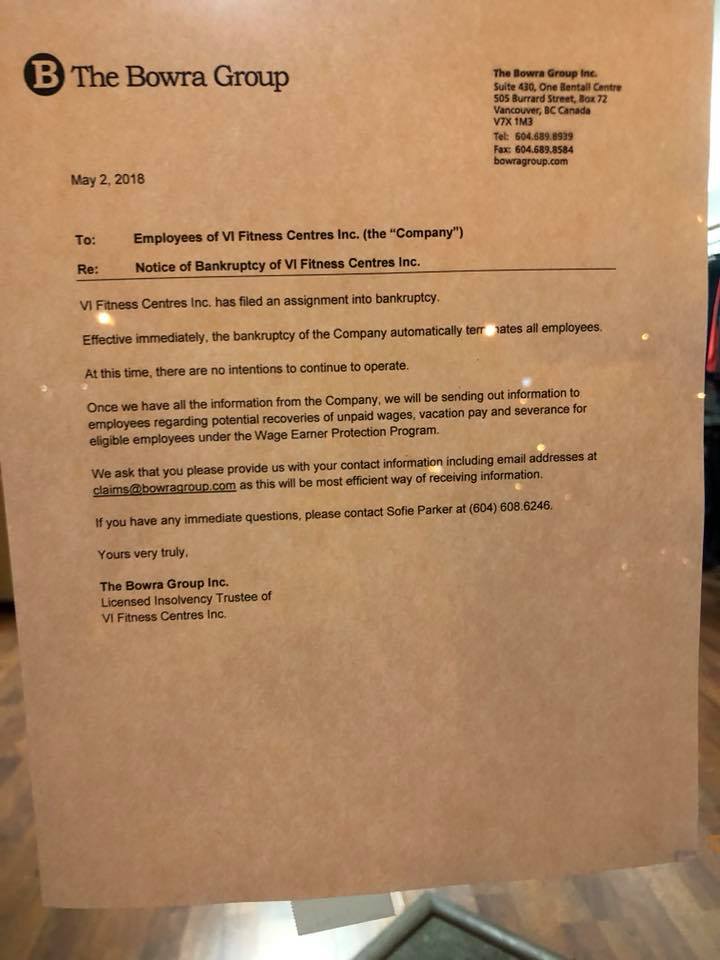 VANCOUVER ISLAND, B.C- Former members of VI Fitness For Women shouldn’t hold their breath waiting for a refund from the recently bankrupt company.

Early this morning, employees and members of the Campbell River location found a sign on the gym’s door from the Bowra Group, a licensed insolvency trustee for VI fitness, stating the company was bankrupt and all of it’s employees terminated.

An email was also sent out at midnight notifying people of the closure.

Mario Mainella, senior vice president at the Bowra Group, said they are working to see if any members will receive their money back.

“There is a high probability that there won’t be any refunds. But I don’t have a definitive answer,” said Mainella.

“It comes down to the rules of bankruptcy and insolvency. Most people who have paid would be considered creditors. But we are working through that at this time. I’m not making any promises.”

According to him, people should contact their credit card company to see if there is any way to get a refund from them.

Mainella said that eligible employees would be able to recoup up to $3500 in owed wages, severance or vacation pay from the Wage Earner Protection Act, a federally funded program.

But if VI owed an individual anything above that figure, it probably won’t be reclaimed.

Mainella urges former members and employees to go to the Bowra website for updates and information.

2day FM will keep you updated as the story progresses.