Electoral reform to be discussed at library event this month 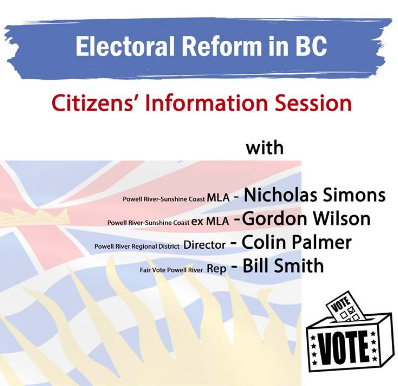 POWELL RIVER, B.C. – Residents are invited to discuss and learn more about electoral reform in Canada at an event later this month.

Fair Vote Powell River is a chapter of Fair Vote BC, a group supporting electoral reform and the campaign for proportional representation.

“There’s four different local politicians who are going to be sharing their own experiences about elections,” Merlino said.

“The discussion is going to be the upcoming referendum in British Columbia about proposed changes to the way our elections work in the province, making it a proportional system or not and each person will share their views about that, the advantages and disadvantages based on that topic.”

Merlino said registration is not required, and all residents are welcome to attend the event at the Powell River Library.