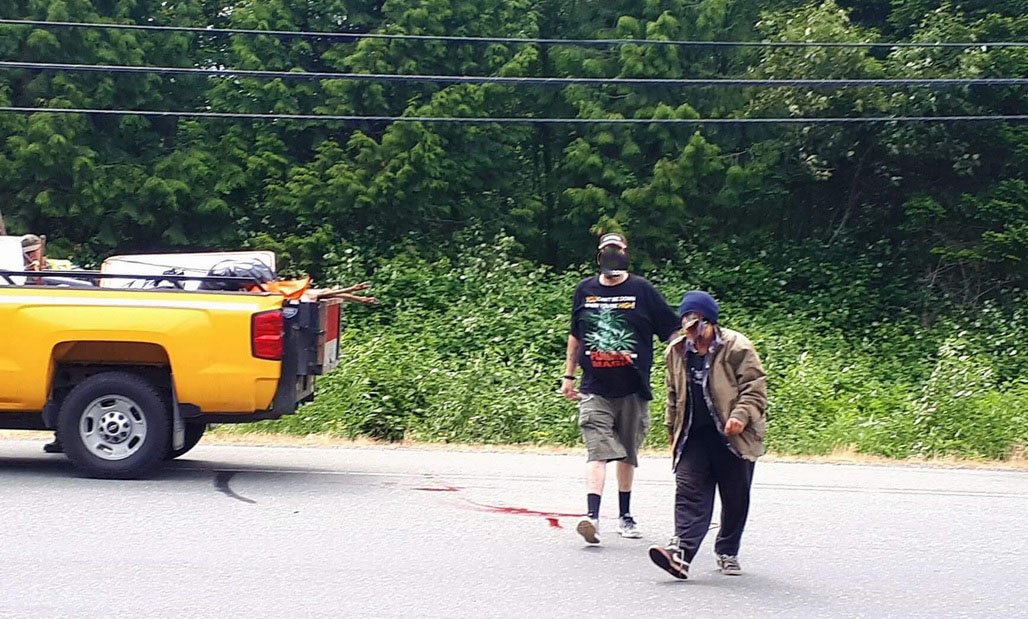 CAMPBELL RIVER, B.C- A Campbell River resident said she witnessed the inhumane treatment of a deer along the Old Island Highway yesterday afternoon.

According to Crystal Martin, at around 2:00 pm on Wednesday she saw an injured deer near the Jubilee turn-off on Highway 19A.

She said she got out of the car because she was concerned about the animal, which was injured but still moving.

“The deer got up and was sort of wobbling like it was intoxicated. It was definitely shocked, but standing up,” said Martin.

According to her, two men tied a rope around the animal’s neck, and began to kick it before cutting it’s throat.

Another witness, Sheri Lynn, who did not want to use her last name, was driving by at same time and said she saw the men and Martin, along with a deer that had a rope around it’s neck.

“They kicked that animal repeatedly in the head. One of the guys stood on it’s leg. They didn’t just cut the neck, they sawed it,” she said.

Operations manager for Emcon Services, Stewart Westwood, confirmed that their company had dispatched a truck to the area to clean up a deer at that location yesterday.

“While the worker was handling the call, they noted that the deer was not deceased, and that’s when a member of the public pulled up,” he said.

Westwood said that the member of the public “took care of” the deer.

According to Martin, while she was taking photos, one of the men yelled profanities at her and approached her.

“I was lucky because he was trying to grab my phone, I got into my car and locked my door,” she said.

“He tried to open the car door.”

The operations manager for Emcon said he could not comment on anyone approaching Martin, as he was not there.

According to Westwood, Emcon does not make the final decision on how, or if, an animal should be put down.

“The worker wouldn’t have any input on that, it would be up to other agencies to deal with,” he said.

“If the animal is not dead, we will contact the RCMP or a Conservation Officer, the employees are only there to clean up the animal.”

RCMP spokesperson Ron Vlooswyk said he was not aware of any calls from Emcon about the deer.

No formal harassment complaints were made either.

The BC Conservation Officer Service was unavailable for comment, however they did issue a statement to the public:

“The public should call RAPP (Report All Poachers and Polluters) if they injure wildlife accidently, by vehicle strike or by any other means,” the statement read.

“Public should not action the wildlife themselves, as they are at risk of being hit on the road themselves, or can push the wildlife back onto the road where it may be subject to further injury, or injure other members of the public.

At times officers are required to euthanize road injured wildlife, but this is always done in the most humane manner possible, public should not attempt to do this themselves.”

Westwood said he will be reaching out to the employee for more information on the incident.