DFO investigations on whale-distance violations to depend on available evidence 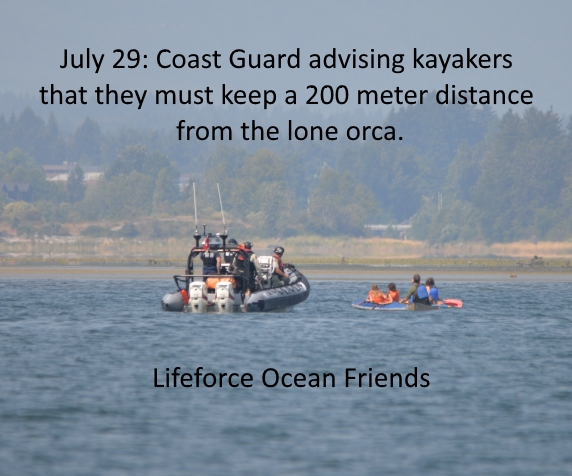 COMOX, B.C- It remains unknown whether or not fines will be handed out after the visit of an orca to the Comox Harbour.

According to Peter Hamilton, who said he was the founding director of LifeForce Ocean Friends, boaters, kayakers, and paddleboarders repeatedly violated a distance limitation of 200 metres around the orca that visited Comox Harbour over the past two weeks.

Hamilton said there were “a lot of problems” with that distance not being followed, and Department of Fisheries and Oceans boats later came by to inform people of the rules.

He told the MyComoxValleyNow.com newsroom that his organization is forwarding complaints to DFO, along with photographs showing the distance rule being broken.

According to DFO spokesperson Leri Davies, the fishery officers who were present in the harbour were more focused on education instead of court appearances.

“Conservation and Protection (DFO’s enforcement arm) will conduct investigations if the situation warrants it, however, this is at the officer’s discretion and it would depend on the evidence available,” said Davies.

“Going forward we would like to remind the public that watching whales and other marine mammals in their natural surroundings gives Canadians an opportunity to better appreciate these beautiful animals, but when humans get too close to wildlife in their habitat, we risk disturbing and even harming marine wildlife.”

Davies said that marine animals face a complex mix of threats, such as increased noise levels from passing ships, vessel strikes, gear entanglement, and water pollution, with those threats being particularly challenging for endangered whales.

“All approach distances outlined in the regulations were determined using the best available science. The Department considers a 100 m approach distance to be appropriate for marine mammals in most circumstances without unnecessarily restricting the public from enjoying marine mammal viewing. The 200 m approach distance for killer whales on the Pacific coast is supported by published studies and evidence that this distance will reduce noise and vessel interference with whale foraging activities.”

Davies said that regulations on whales applied to all boaters, both commercial and recreational.

“Anyone who contravenes the Regulations may be charged with an offence under the Fisheries Act and, if convicted, may be subject to punishment of a fine up to $100,000 on summary conviction, or $500,000 if the Crown proceeds by indictment, or, for a subsequent offence, a higher fine or imprisonment,” said Davies.

“Marine mammals are wild animals that people may inadvertently come across while enjoying our oceans. In those cases we ask that you keep your distance, not only for their well-being, but for yours as well.”

Anyone with information on violations of the Fisheries Act, regulations, or other illegal activity can call the toll-free reporting line at 1-800-465-4336.