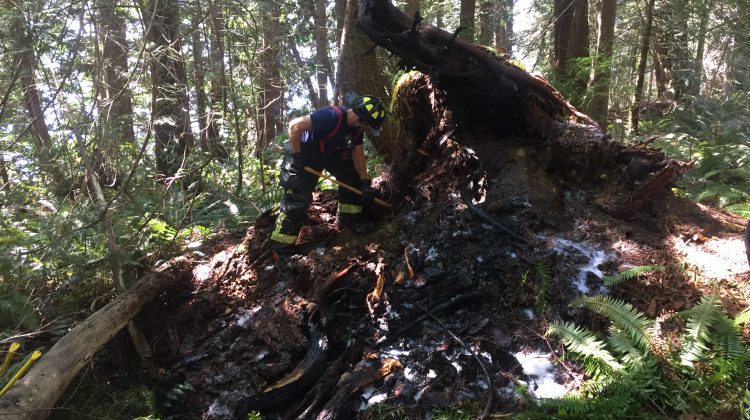 A Powell River firefighter cleans up after crews knocked down a fire along the Millennium Park Trail on August 6, 2018. Photo courtesy Rocky Swanson.

POWELL RIVER, B.C. – The Powell River Fire Department is reminding people to be extra vigilant in light of the hot, dry summer weather.

This comes after the local fire department responded to a call along the Millennium Park Trail at Willingdon Beach.

“Once our crews arrived, they did end up fighting, not a very large fire but large enough that it took a few hours to extinguish that was inside of a very large old-growth cedar tree stump, and around that was a lot of dry timber,” said Rocky Swanson, the Deputy Chief of the Powell River Fire Department.

He said the blaze took a lot of manpower, and that had the fire been worse, a significant portion of the trail and nearby campground could have been lost.

“I don’t know if it was a campfire but there was enough human refuse around to indicate that it was a man-made intervention of some kind, and we believe it was smoking,” Swanson explained.

He said that although the undergrowth is fairly green in the area they responded to, there is enough dry material underground that the fire could actually burn below ground and “pop up every so many metres and catch other old things on fire.”

“Therefore, we would end up possibly having major loss within that trail,” he said.

Swanson advised against smoking in the trail and to not have any kind of open flames along the path.

“If you’re so compelled that you must smoke, then carry a bottle of water with you and extinguish your cigarette inside the bottle of water and bring the butts out with you,” he said, speaking with MyPowellRiverNow.com on Tuesday.

Fortunately, crews were able to knock down the fire and no injuries were reported from the scene.