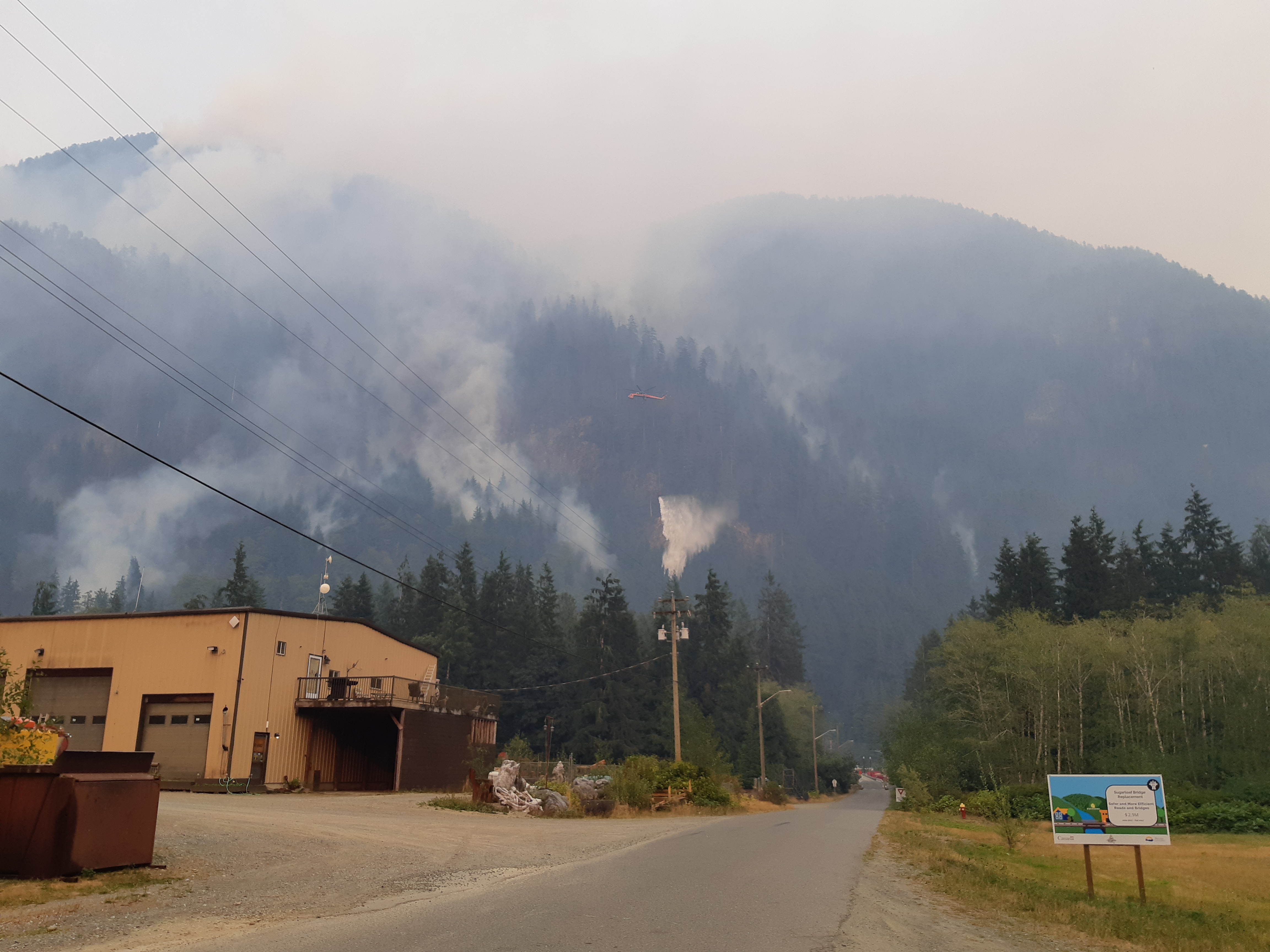 VANCOUVER ISLAND, B.C. – Flames can still be seen across northern Vancouver Island as wildfires continue to burn the region.

A fire in the village of Zeballos, labeled the Gold Valley Main fire, has resulted in an evacuation order for six homes in the area. However, some relief could be in sight.

“The fire, luckily, is moving away from the town at this point. So that’s good news,” said Lynne Wheeler, a Fire Information Officer with the BC Wildfire Service.

An Erickson air crane helicopter is dumping water on the fire, as well as an additional helicopter.

The crane can carry 2,000 gallons of water in their bucket and conduct controlled drops. Wheeler said it’s been very effective at cooling the area down to protect buildings.

“We have five firefighters working on that, and five structural protection unit guys. So that’s the volunteer firemen that have been trained to protect structures. They’re putting sprinklers in place to protect the local homes and buildings,” she said.

“Our priority is just maintaining the safety of first responders and the people of Zeballos.” The fire is currently listed at 90.10 hectares in size.

Wheeler spoke about some initial criticism the fire service received after not responding to the burn right after it was discovered.

“At the time, we assessed the fire. It was in very steep terrain and it was not safe to put firefighters in there,” she said.

“The decision was made not to drop water at that location because it could have caused the fire to roll down the hill and exacerbate the fire so once the fire moved up and over the bluff and into the gulley, then they were better able to start bucketing that fire and that’s why they started ‘actioning’ the fire at that point.”

She said that she believes firefighters reacted with the best information they had based on their experience and knowledge. She said she could not speak to whether or not crews would take the same action time-wise if this happened again.

According to the Coastal Fire Centre, the Zeballos area fire was discovered on Friday, August 11th.

Another fire on the CFC’s radar is at Espinose Creek, west of Zeballos.

“It’s estimated at 15 hectares in size. We have 15 firefighters working on it today, and one helicopter.”

That fire is currently two to three kilometres away from the Oclucje Reserve, home of the Nuchatlaht First Nation.

Wheeler said there is no evacuation order for residents of the reserve.

A third major fire, and the largest of the above mentioned three, is at Pinder Creek, alongside the Zeballos Forest Service Road.

It’s estimated at 200 hectares in size. Wheeler said 17 firefighters are working on that blaze, with two pieces of heavy equipment and three helicopters.

“It’s along the only road into Zeballos, so our highest priority is keeping that road open. It’s currently 10 per cent contained,” Wheeler said.

“Firefighters are working to establish guards, and working very closely with fallers and they’ve been putting hose-lays along the northern edge of the fire east to west, to try and keep that fire away from the road.”

She noted that the road remains open, but intermittent delays are expect to allow crews through to the work zone.

Crews are also working along the highway into Port Alice.

The Larry Lake Fire is threatening hydro poles, which has lead to on and off power outages in the village. Wheeler said that fire is five per cent contained.

“Crews are working closely with BC Hydro to maintain and enhance the containment of this fire. There are temporary road closures in place as fallers and heavy equipment are working near the road,” she explained.

Flaggers are on site directing traffic. The fire is listed at 10 hectares, and 31 firefighters are working to douse the flames.

Two pieces of heavy equipment and two helicopters are also helping in the fight.

Wheeler said for that fire, protecting the hydro lines and the road remain the highest priority for the service, along with the protection and safety of emergency crews and residents of Port Alice.

Image caption: Fire smouldering on the mountain behind the village of Zeballos. Photo by Cole Kelly/Vista Radio.