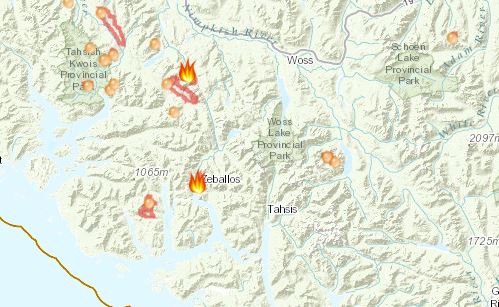 VANCOUVER ISLAND, B.C. – Two wildfires that have been burning near Zeballos for more than a month are now completely under control.

And torrential weekend rain was a big factor.

As much as 50 millimetres of rain fell on some areas of the North Island, all but quelling the Pinder Creek wildfire alongside Zeballos and Gold Valley Main wildfire near the village.

The lightning-caused, 68-hectare wildfire was first discovered Aug. 11 and is estimated to be 40 percent contained.

However, BC Wildfire reports that this wildfire is now considered under control, meaning that it has received sufficient suppression action to ensure no further spread of the flames.

“It’s currently being monitored and we no longer have any crews on that fire because it’s considered under control,” said Quinsam Complex information officer Rosalie MacAulay said.

Due to the progress made by crews and the arrival of very wet weather, there are no significant changes anticipated beyond Sept. 8.

This wildfire is part of the Quinsam Complex that consists of more than 50 active wildfires that are not considered out. These fires are not expected to spread but there may be smoke visible.

Discovered Aug. 11, the lightning-caused 333-hectare wildfire located in the vicinity of the Zeballos Forest Road is 100 percent contained and under control.

On Sunday, firefighters were assigned to Pinder Creek and crews will be patrolling this wildfire.

No crews are needed at the wildfire today but it is being monitored.

“Over the last few days the rain has helped the crews and the fire suppression efforts,”MacAulay said.

And while fire crews aren’t working on those wildfires anymore, MacAulay stressed that they are still being monitored and, if necessary, scanned.

“And we’re also doing rehabilitation on them,” she added.

This has been the worst wildfire season on record, with 2,060 wildfires started since April 1, burning through 1,331,132 hectares in the province.

Rain and cooler temperatures have reduced the wildfire risk to a point where BC Wildfire Service has rescinded campfire bans in specific regions effective as of noon this past Friday, Sept. 7.