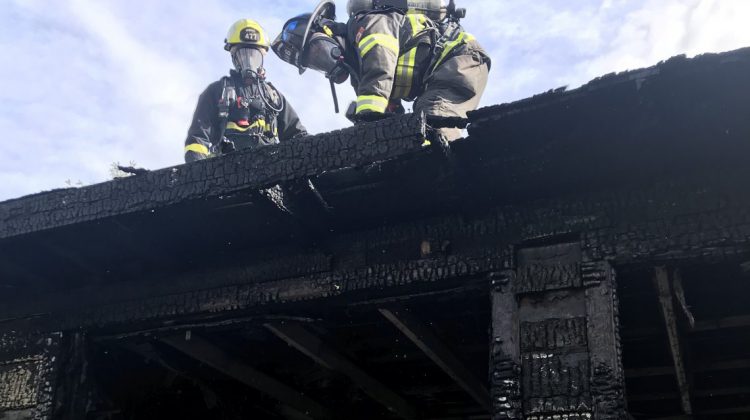 Fortunately, thanks to quick thinking from four-year-old Leon Scott, no one lost his or her life as a result of the Willow Avenue fire.

Powell River Deputy Fire Chief Rocky Swanson said they have surmised that the young boy was getting something to eat when the fire broke out between 9:00 a.m. and 9:30 a.m.

“He tried to do the right thing, fight the fire a little bit, and then he tried to wake up his parents. They weren’t waking up very easily, so he worked very hard to wake them up,” Swanson said.

“This fire was growing rapidly, the smoke development would have been intense. They (the parents) were eventually woken up by him, and everybody got out of the house, but only moments before this place was fully involved. I believe, sincerely, that it was the actions of this young boy that saved his parents.”

A neighbour was also present in the duplex, and escaped without injury.

Swanson said he’s planning to approach the mayor’s office and city officials, in order for the child to receive proper recognition for his actions.

He could not say what exactly caused the fire.

Leon’s step-mother, Alicia Yantz, said she and her husband Andrew are extremely proud of the four-year-old.

“By 9:30 in the morning, Leon came into our bedroom screaming that there was smoke and fire,” she said, speaking with MyPowellRiverNow.com on Monday.

“Our head space is definitely a lot better now than it was before. Everything’s been brought into perspective, and we’ve been so blessed with everything that everyone’s been helping with, and we can’t thank the people enough.”

Yantz said after the fire, the trio stayed with her father, but they’ve since moved into a new family home.

“Lots of kids, they would either run or hide, but obviously he’s (Leon) a pretty smart kid. We had to get new phones because we had lost ours, so we used the little gift cards that came with them to buy him his own little ‘congratulations, you’re a hero’ tablet,” she said.

“He’s gonna get to talk to the mayor, and we’re so proud of him. Words can’t even express how proud we are of that little man.”