A two-game sweep of Port Alberni in their best-of-three series lifted the Kings to the Vancouver Island championship.

The local boys beat Port Alberni 2-1 and 4-0 to clinch the island title.

The Kings are headed to Cranbrook tomorrow to defend their provincial Tier 3 championship. 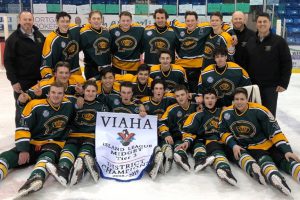 All but five players are back from last year’s squad that won the B.C. title for the first time in Powell River history.

“We don’t take anything for granted but they’re ready to play. We’re not going in cocky but we’re going in humble. We’re there to work hard and achieve our goal.”

Behan said this year’s team is a skilled, fast-skating team led by head coach Andy Welsh, who has been to the provincials three years in a row, once at the bantam level and now twice with the midget team.

“He doesn’t have a player on the team but he’s an unreal coach who expects a lot from the guys but they respect him,” Behan said. “We’ve got a good thing going but a lot of it’s credit to Andy.”

The coach is Andy Welsh, who is assisted by Scott Mastrodonato. The team manager is Warren Behan.