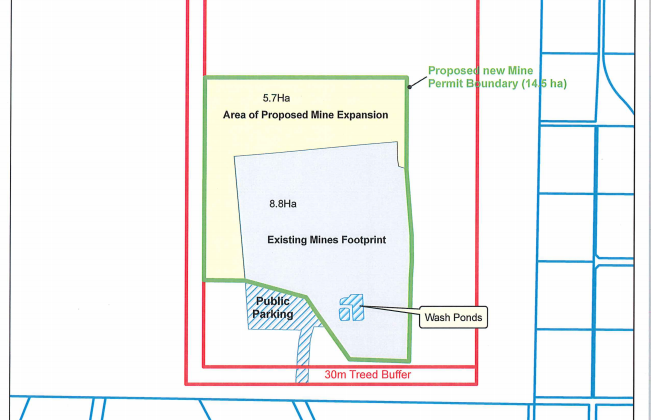 Photo from The City of Powell River

POWELL RIVER B.C – A quarry in the Powell River area is getting an expansion.

On April 9th, the qathet Regional District Planning Committee considered a BC Ministry of Energy, Mines and Petroleum Resources Mines Act amendment to add an area of 5.7 hectares to the current site located south of Powell River on the Sunshine Coast Highway and Stevenson Rd.

With the proposed expansion the total area of the site would be 14.7 hectares.

qathet Regional board chair Patrick Brabazon said that the board followed the recommendation of staff because the Official Community Plan is the governing document, and no concerns were brought to the board.

“The OCP is the governing document, once we establish an OCP we have to honour it word by word, unless somebody comes forward with some new information to make us change our minds,” said Brabazon.

“There have been no complaints, no comments from the public, we just have the OCP to govern our actions. So the directors, including myself supported the recommendation of staff.”

The report mentions that the sites existing and proposed business will support up to eight full time and part time employees.

It also says the site has been in operation since 2009, and the company meets the current land use bylaw.

An expansion of the quarry was first proposed in 2009, and again in 2011 with both requests being voted down by the board as a result of the impact on residents and the environment.

The new proposal however, acknowledges and meets the conditions requested by the committee in 2009, and 2011.

The planning committee defeated the motion to object to the application and carried the original motion to support it, with only Gisborne opposed.