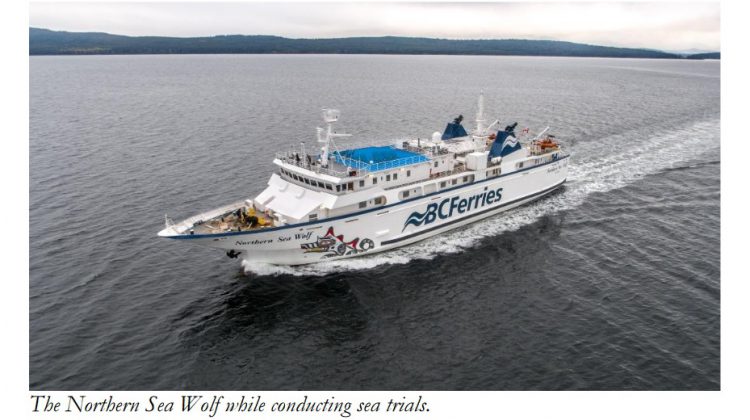 The Northern Sea Wolf is pictured in a photo released by BC Ferries. Image courtesy of BC Ferries.

PORT HARDY, B.C- The new ferry between Bella Coola and Port Hardy will be starting up on Saturday.

According to a news release from BC Ferries, the Northern Sea Wolf will begin service on the Central Coast route on May 18, after finishing sea trials and dock fits during April and May.

The seasonal direct service between Port Hardy and Bella Coola will begin on June 3rd.

The vessel had headed out of the ferry refit facility in Richmond on May 3rd, and did dock trials at the ports it will serve on its route.

There will be open houses for the vessel at the terminal in Bella Coola  from 2 to 4 p.m. on June 2 and 7 to 9 p.m.at Bear Cove terminal in Port Hardy on June 3 to showcase the vessel to the communities.

According to Black Press, the vessel will cost a total of $76 million, instead of the original $55.7 million budgeted for the project. That price tag also comes after a year’s delay.

The vessel was built in Greece in 2000, and underwent a major refit by the ferry service in 2017.

“In many aspects the vessel is totally new.”

Kwakiutl First Nation’s Richard Hunt and Nuxalk Nation’s Danika Naccarella designed the artwork that adorns the vessel, according to the ferry service.

The art is shown on the inside and outside of the Northern Sea Wolf for passengers to view, along with profiles of the artists.

The vessel got its name from BC Ferries and community stakeholders, in honour of a First Nations legend where the Sea Wolf is a manifestation of the Orca.

“The designs depict the beauty of the majestic animal, with The Sea Wolf the symbol of family, loyalty and the protector of those travelling their waters,” read the announcement.

“BC Ferries looks forward to offering customers a breathtaking journey into the heart of the Great Bear Rainforest on a vessel that will provide safe and reliable service for many years to come.”