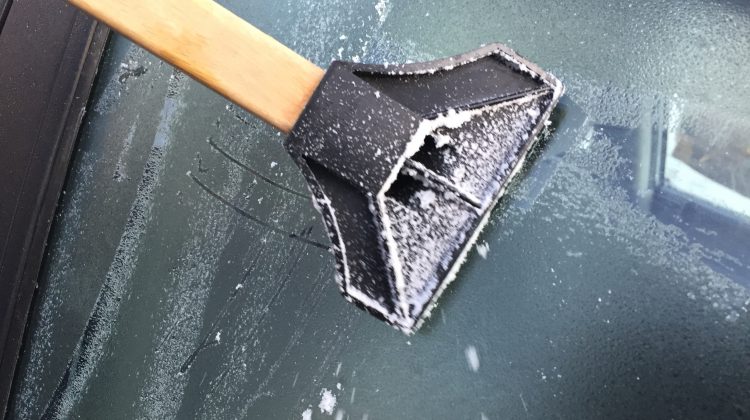 You had to break out the ice scraper with an Arctic front bringing historically cold temperatures to the region this weekend. (Troy Landreville, MyPowellRiverNow.com staff)

Call it the big chill.

The Comox Valley was the lone outlier in the region.

The valley’s low of 2.6 degrees Celsius yesterday morning wasn’t close to the record of minus-1.7 degrees for the day set in 1927. All records in the valley for October are below freezing.

“It is still significant in the sense that maximums are typically 13 (degrees for the high) and six (degrees for the lows),” Environment Canada meteorologist Armel Castellan said. “You’re obviously hitting a little bit below that, about five degrees colder than normal than the minimum temperatures.”

“It’s really due to the lack of insulating blanket of cloud as we so typically have this time of year. So when we have those big open skies and particularly nights, by the early morning obviously we’ve radiated all of that away from the surface and that’s why we can get down to those temperatures.”

Campbell River plunged to minus-5.1 degrees early yesterday morning, obliterating the previous mark for Oct. 9 of minus-1.1 degrees from 1973.

This morning’s minus-4.4 degree low was also record-setting, edging the previous Oct. 10 record of minus-3 that stood for 36 years.

Up in Port Hardy, it dropped to minus-2.5 degrees yesterday morning, erasing the previous mark of 1.1 degrees dating back to 1957.

This morning’s minus-1.8 degree low in Port Hardy beat the district’s previous record of minus-0.6 low from 1972.

It’s also been historically cold in Powell River, which saw a record low of minus-2.5 degrees yesterday.

That’s a four-and-a-half degree difference from the previous record for Oct. 9, of two degrees set in 2017.

It got as cold as minus-1.6 degrees in Powell River this morning. This sets a new cold standard for Oct. 10, beating the old record of minus-0.3 degrees from 2008.

Castellan noted that a cold front is pushing temperatures down.

“When you have a cold front that sweeps by and it can be (in the) middle of the afternoon, and then your temperatures will plummet right behind that cold front and the coldest part of the day might be in the afternoon, sometimes, but that’s quite rare and certainly not the case in this last event.”

We could see more records fall early tomorrow morning before the clouds move in and the cold moves out.

Starting on Saturday and into next week, the forecast calls for lows to hover between six and eight degrees.

That’s at or just above normal for this time of year.