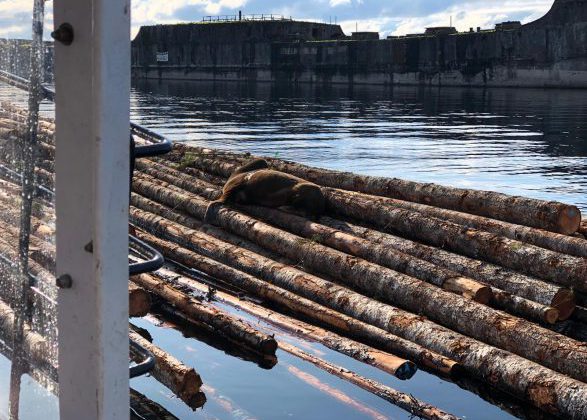 A male California sea lion suffering from horrific injuries as the result of being shot with a crossbow was transported from Powell River to the Vancouver Aquarium Marine Mammal Rescue Centre on Tuesday.

A team from Fisheries and Oceans Canada alongside Vancouver Aquarium rescue centre staff were dispatched after reports emerged of a visibly wounded, emaciated and lethargic sea lion hauled out on a log boom at a mill where community members leapt into action to assist the rescue efforts.

The older male sea lion, estimated to be 250kg, is suffering from a massive puncture wound and is severely dehydrated and underweight as a result of the bolt.

“He’s likely been suffering for weeks and has been unable to forage and hunt which has worsened his condition. It’s heart-breaking to find an animal in this state; it’s unacceptable to be harming wildlife like this. We’re all very grateful to the community for their incredible efforts during this rescue” said Dr. Martin Haulena, Head Veterinarian at the Vancouver Aquarium Marine Mammal Rescue Centre.

The sea lion has been nicknamed Archie as a tribute to Archie Kenmuir, the boat operator, and his team at Jepson Mobile Booming, who were instrumental in helping our team sedate and extract the sea lion from the log booms.

“It was truly an epic rescue. There is no other way to describe it. The coordination and community effort to help this animal was amazing. Archie Kenmuir maneuvered the log bundle and our rescue team expertly to shore. It was an impressive sight and a silver lining to this sad story to see everyone come together to help this sea lion.” said Emily Johnson, Assistant Manager of the Vancouver Aquarium Marine Mammal Rescue Centre. 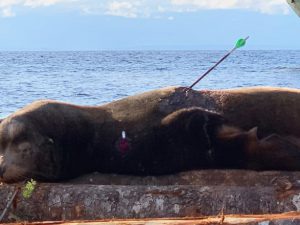 Archie, the sea lion, is being treated with antibiotics, fluids and pain medication for the necrotic puncture wound. His care team also noticed abnormalities with his eyes, possibly indicating prior gunshot wounds. He will undergo further examinations at the hospital this week to determine the extent of his injuries.

Archie is the third sea lion in less than two and a half years to be admitted to the rescue centre as a result of human-inflicted injuries, after Senor Cinco was rescued from Spanish Banks Beach Park May 5, 2017, and Ukee, from the west coast of Vancouver Island last October; both were shot in the head and blinded.

You can help support the ongoing rescue and rehabilitation of marine mammals in distress by becoming a Marine Mammal Rescue Centre donor.