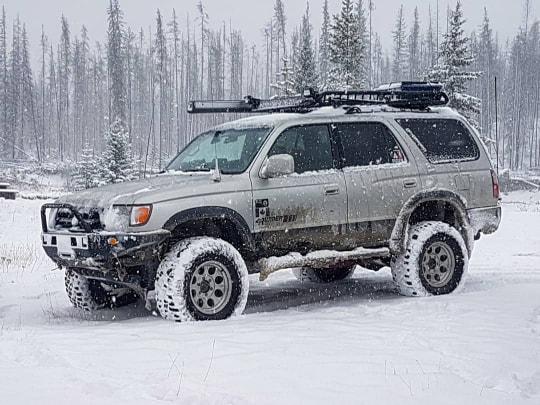 There are superheroes in our midst.

But instead of wearing capes, they drive Toyota 4x4s.

During this week’s winter storms, members of the VI Toyota 4×4 club drove healthcare workers to hospitals throughout the Vancouver Island.

More than 100 club members offered lifts to hospitals up and down the island, including in the Comox Valley, Campbell River, and Port Hardy.

Group member Shelby Newcombe said the infrastructure for dealing with snow isn’t the best on the island.

“It’s limited,” he said. “So we understand that it’s safe to stay home but if they don’t get to work, then the patients get no care.”

This is the second year that the club members have offered this service to the Vancouver Island Health Authority (VIHA).

“We set up a system with them (last year) that was kind of clunky at the time, looking back,” Newcombe said. “We would give our contact information to them and then they would pass it on to people needing a ride.”

This year, seeing the snowfall in the forecast, the group decided to be a little more proactive and set up a Facebook group called “VI Toyota 4×4 & VIHA Staff Transportation.”

“Now, instead of having to go through a middle man, they can post up where they are, where they need to get to, and then our members can respond if they’re in that area, so it’s worked out really well.”

Newcombe was coming off a marathon shift with his young son in tow.

“I picked up my little guy and brought him along for a 16-hour adventure with dad,” Newcombe said.

From 5:30am to about 9:30pm yesterday, Newcombe gave rides to workers in the Sooke and Victoria areas.

He said club members were responding in droves: “Every time I would go to a hospital, I’d see a couple of my buddies, there, dropping people off and picking people up. Anywhere on the island that was needed, we would be there. It was really neat.”

This isn’t a one-off.

The members are eager to volunteer their driving services again, when the next big snowfall hits.

“We’ve already got the page set up, everyone knows how it works and it’ll just get smoother and smoother every time.”

Newcombe said that as far as he knows, there were no accidents.

“Safety-wise, everything was good,” he added. “A lot of our members are very experienced in snow. We actually relish the opportunity to play around in it. It’s fun to kind of take over the city from time to time because usually we have to be out in the bush, away from all the action, but this time, we get to own the city. It’s kind of fun.”