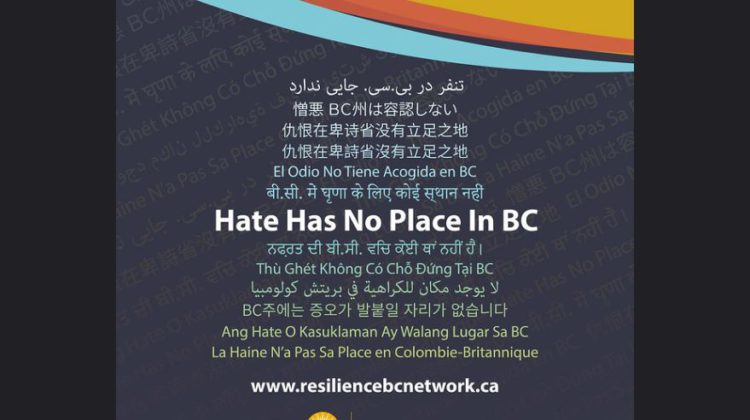 Resilience BC. (Supplied by the Province of B.C.)

Seven groups are getting funding to support Resilience BC programming.

Launched last November, Resilience BC is a province-wide anti-racism network delivered through a hub-and-spokes model.

In May, the province selected the Victoria Immigrant and Refugee Centre Society as the hub to connect communities with information, training and resources.

The spokes are community branches that move projects forward to address racism at a local level.

In the Vancouver Island/Sunshine Coast region, seven groups are getting $52,500 including:

Courtenay-Comox MLA Ronna-Rae Leonard says these funds come at a critical time when we are trying to stem the tide of racism and hate in B.C.

Leonard said racism touches everyone, including one of her relatives.

“I have a niece who is a person of colour who through the events of the last month or so has revealed her own experiences, and the hardest thing for me to hear is how she had internalized some of the negative messaging that she had received from people who were her peers,” she said.

Most recently through the program, the provincial government launched an online portal to support people who experience or witness a racist incident.

The province has invested close to $540,000 in the Resilience BC program so far as part of its commitment to stand up for diversity, end racism and all forms of discrimination, and support multiculturalism in British Columbia.

You can learn more about Resilience BC here.