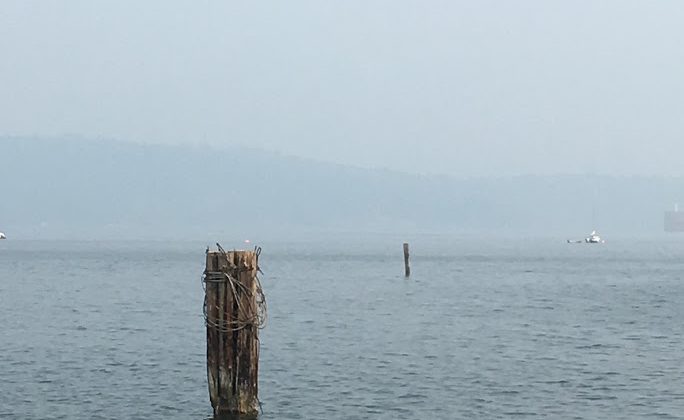 Smoke is obscuring the view in many parts of Vancouver Island and the Sunshine Coast. (Mackenzie Chisholm, Vista Radio staff)

We’re not out of the smoke, just yet.

Environment Canada is calling for more soupy weather on Vancouver Island and the Sunshine Coast.

That’s all due to wildfire smoke blowing in from the U.S. West Coast.

“It’s not going to be a slam dunk sort of changing of the entire air mass, it’s still going to be hopefully strong enough, there’s going to be rain associated with it,” Castellan said. “We should maybe see five to 25 millimetres (of rain) depending on the model right now. On Thursday in the afternoon, or overnight period, we should see something in the way of the wind, something in the way of precipitation, so it will be helpful, but I’m not going to say it will alter the airshed completely, but I think it will be quite helpful, nonetheless.”

For the time being, we remain under an air quality advisory, meaning you should limit your time outdoors.

That’s because the smoke is making it hard to breathe for some people in the region.

The air quality health index (AQHI) forecast for the Comox Valley today and tomorrow is 10+, or very high risk.

It’s the same story down island in Duncan.

The index reports on the health risks posed by a mixture of pollutants, including particulate matter, ground level ozone, and nitrogen dioxide.

According to the BC Centre for Disease Control, wildfire smoke can wreak havoc on your body.

Castellan says small smoke particles can travel deep into your lungs when you inhale.

“Not only are you breathing it into your lungs, but it’s so small it can actually penetrate into your bloodstream and do damage to organs and other things. That’s the biological science added to this very weather-related element or hazard,” he added.

However, you should call HealthLink BC (8-1-1), talk to your primary care physician, or visit a walk-in clinic if you’re experiencing: shortness of breath, severe cough, dizziness, chest pain, and heart palpitations.

Meanwhile, Castellan says the direct feed of smoke from California, Oregon, and Washington State is backing off a little bit.

“Now that feed is going north and east because it’s a southwesterly flow, so we’re no longer getting additional smoke but we are still dealing with relatively stagnant air which is the big problem.”