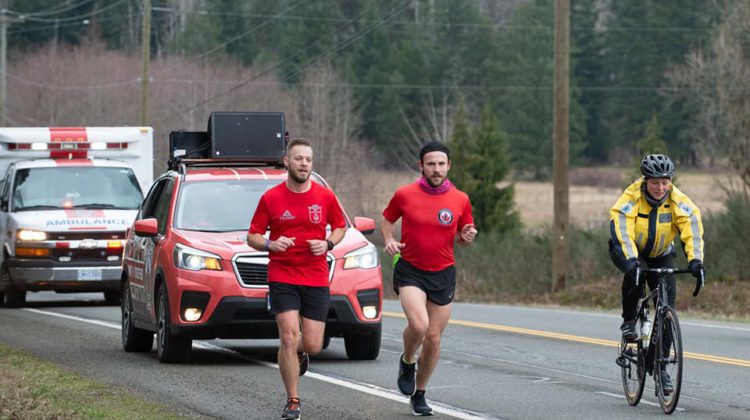 Photo taken from the 2020 Wounded Warriors BC Run, provided by Facebook

With the latest round of provincial health orders, the 2021 Wounded Warrior Run BC will not be moving forward.

Normally, the run takes place in February with eight runners going from Port Hardy to Victoria to bring awareness and raise funds for Wounded Warriors Canada.

This year though, organizers rescheduled for April  hoping it would be safe to operate then.

Unfortunately that is not the case and they have said the run will be moved to 2022.

Despite the setback, Wounded Warriors BC said in a press release that individuals across the island were able to raise over $75,000 in donations, with more still coming, despite not being able to physically be together.

“We won’t stop raising awareness and funds for life changing and family savings programs and services for members of our Military, Veterans and First Responders who have been impacted by Operational Stress Injuries such as PTSD! No matter when or where we are running on Vancouver Island, we are all truly #InThisTogether.”

“This year has been hard on all of us. One thing that we don’t have the option to cancel or shut down is mental health issues or PTSD. If you need help please reach out, remember you are not alone!”