More than half of British Columbians feel the provincial government isn’t doing enough to combat COVID-19.

An Angus Reid Institute survey found that 55 per cent of people in the province believe the response to the third wave of the virus doesn’t go far enough.

Only the people of Ontario have a higher level of dissatisfaction with their government.

Two-thirds of people are concerned about getting COVID-19 and 81 percent worry that a family member or friend may become sick with the coronavirus.

One-in-three Canadians also say their mental health is either poor or terrible.

That number rises to almost half (47%) among those under the age of 35. The ARI survey found that the most profound negative mental health effects are being experienced by young women. 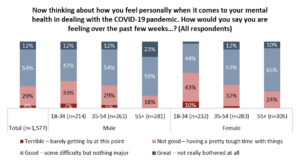 The poll found that 55 per cent of people in BC say Premier John Horgan is doing a good job in handling the COVID-19 pandemic. 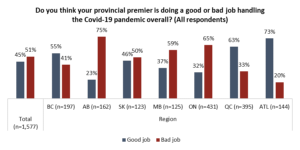 The provincial health officers in every province continue to outpace their premiers when it comes to approval of their performance.

The survey found that Dr. Bonnie Henry in BC has the second highest public approval rating (68%) in the country.

However, that’s down from nearly 90 per cent in April of last year.

The online survey was conducted from April 5 – 8, 2021 among a representative randomized sample of 1,577 Canadian adults.