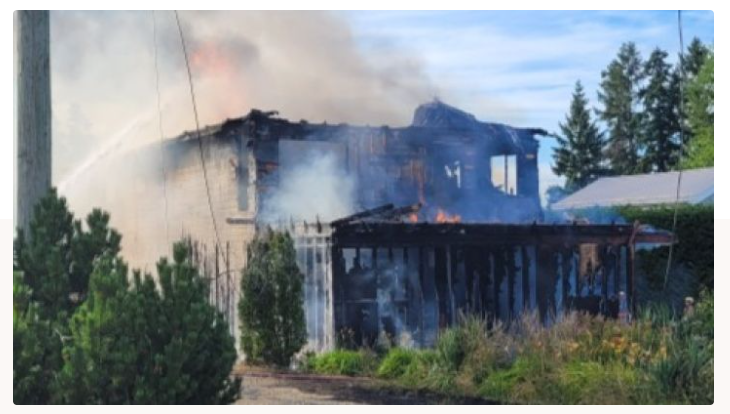 Please Help Fred and his Family Start Over, GoFundMe

A Vancouver Island family is starting over after their home was destroyed by fire.

Fred Shelly says he was driving home from a funeral in Parksville when his neighbour called his cellphone with shocking news.

“He told me, ‘I’m really sorry to tell you but your house is on fire,’” Shelly said.

Once Shelly turned down his street in Royston, he came across fire trucks, police cars and ambulances and then saw his home, still partially engulfed in flames.

“You stand there realizing that everything you have is gone,” he shared.

Built in 1992, the home on Ross Avenue holds many fond memories for Shelly and his family.

“I’ve lived here for 16 years, raised a family here, my neighbour a couple houses down, actually built the house and raised his kids here. This house has been well known for years. It’s kind of the go-to house, we’ve always had friends and entertaining here. There is just a lot of history, and a lot of memories here.”

Shelly, who is 53, said this house was “my retirement plan.”

A friend has set up a GoFundMe to help the family in the short term, as they wait for insurance to get sorted out.

Just recently, Shelly’s daughter, Rachel, had relocated back home to the Island, with her boyfriend Lucas. They, too, were away at Comox Lake when the fire broke out.

“Rachel and Lucas had been living with Fred, so they too lost all of their possessions in the fire,” the GoFundMe said.

“As all of you can imagine, there is a whole lot of chaos, stress, worry, concern, questions and processes happening. So in support of Fred and his family, who have helped so many others over the years, please consider donating to this GoFundMe, in whatever way you can manage, to help them out. If nothing else, perhaps this can help ease some financial concerns while Fred and his family work through everything else. Fred thanks and is hugely grateful to everyone who has reached out, even if he hasn’t had the time to respond to everyone.”

Shelly says they have nothing left but the clothes on their backs.

“I’m fully insured but in the interim, there are a lot of expenses that have to be covered and sometimes, as anybody who has dealt with insurance knows, it takes a little while for that all (to be) in order. Just the little things you don’t think about like, ‘Oh, I need a toothbrush, I don’t have one anymore.’”

He’s now left to wonder what caused the fire: “It goes through your head: What did I do? Did I leave anything on? Was there something that could have caught fire? Was there, was there, was there? And you sit here and you (second) guess yourself until the cows come home. The reality is, there was nothing left on, we know that, and you just don’t know. That’s the scary part. You don’t know.”

Shelly said while you lose a lot of memories and valuables, the most important thing was, no one was home and no one was hurt.

You can link to the GoFundMe here.