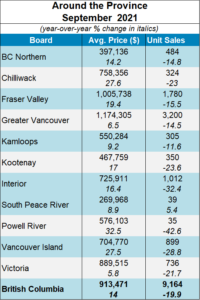 Supplied by the BC Real Estate Association

The BC Real Estate Association reports that sales across the province dropped 19.9 percent last month compared to September 2020.

BCREA Chief Economist  Brendon Ogmundson says the main story in all markets  continues to be a severe lack  of listings supply, particularly on Vancouver Island, the Fraser Valley, and Interior markets.”

Total active residential listings were down 36.8 per cent year-over-year in September for the province as a whole and were more  than more than 50 per cent below last September’s levels in the Fraser Valley and Victoria.

And while sales are down, prices continue to go in the opposite direction.

The average MLS residential price in B.C. was $913,471 in September, marking a 14 per cent increase from just a year ago.