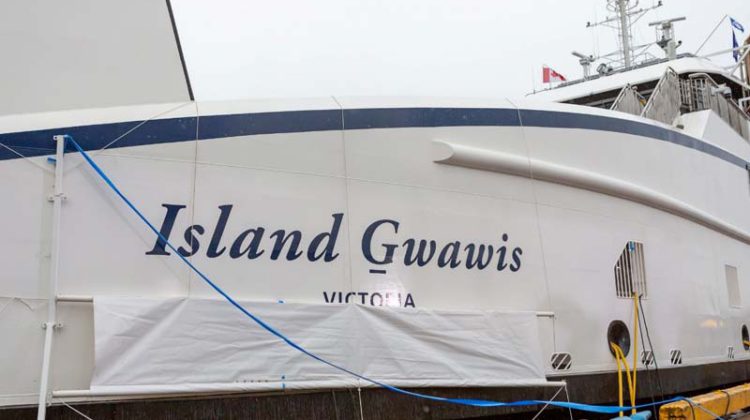 The name of the newest Island Class ferry is being labelled as racist by the local First Nation.

The name, Island Gwawis, was announced by BC Ferries on Tuesday. The hybrid electric boat will be sailing from Nanaimo to Gabriola Island as part of BC Ferries’ new, eco-friendly lineup.

However, the name Island Gwawis has the local Snuneymuxw First Nation upset as the name comes from the Namgis First Nation in Alert Bay. They say the decision shows “BC Ferries executives continue to enact racist and discriminatory behaviour towards Snuneymuxw People,” according to a press release from the First Nation Wednesday.

They say the naming decision is another issue in the area because the new route sits entirely in Snuneymuxw territory.

In a statement, BC Ferries said the names of their ferries do not reflect the areas where they are from as they move around to facilitate needs.

“The names of the Island Class ships are not related to the territories or routes on which they may operate,” said the statement. “The ships are identical, standardized and interoperable. As our vessels move around the fleet to meet operational requirements, we no longer name vessels based on geography or territories.”

The company also said that Snuneymuxw members and other First Nations were invited to engage in the naming process.

Snuneymuxz Chief Mike Wyse said in a statement that the terminals and operations of ferries have been an issue for the First Nation. He said he is disappointed that despite talks with the organization they chose a name from another First Nation.

“These new vessels live in Snuneymuxw territory and will be used on Snuneymuxw waterways,” said Chief Wyse. “However, Mr. Collins [BC Ferries CEO] chose to use and apply Namgis First Nation laws and culture in Snuneymuxw Territory.”

Chief Wyse says he plans to fully remedy the issue with B.C. Ferries.