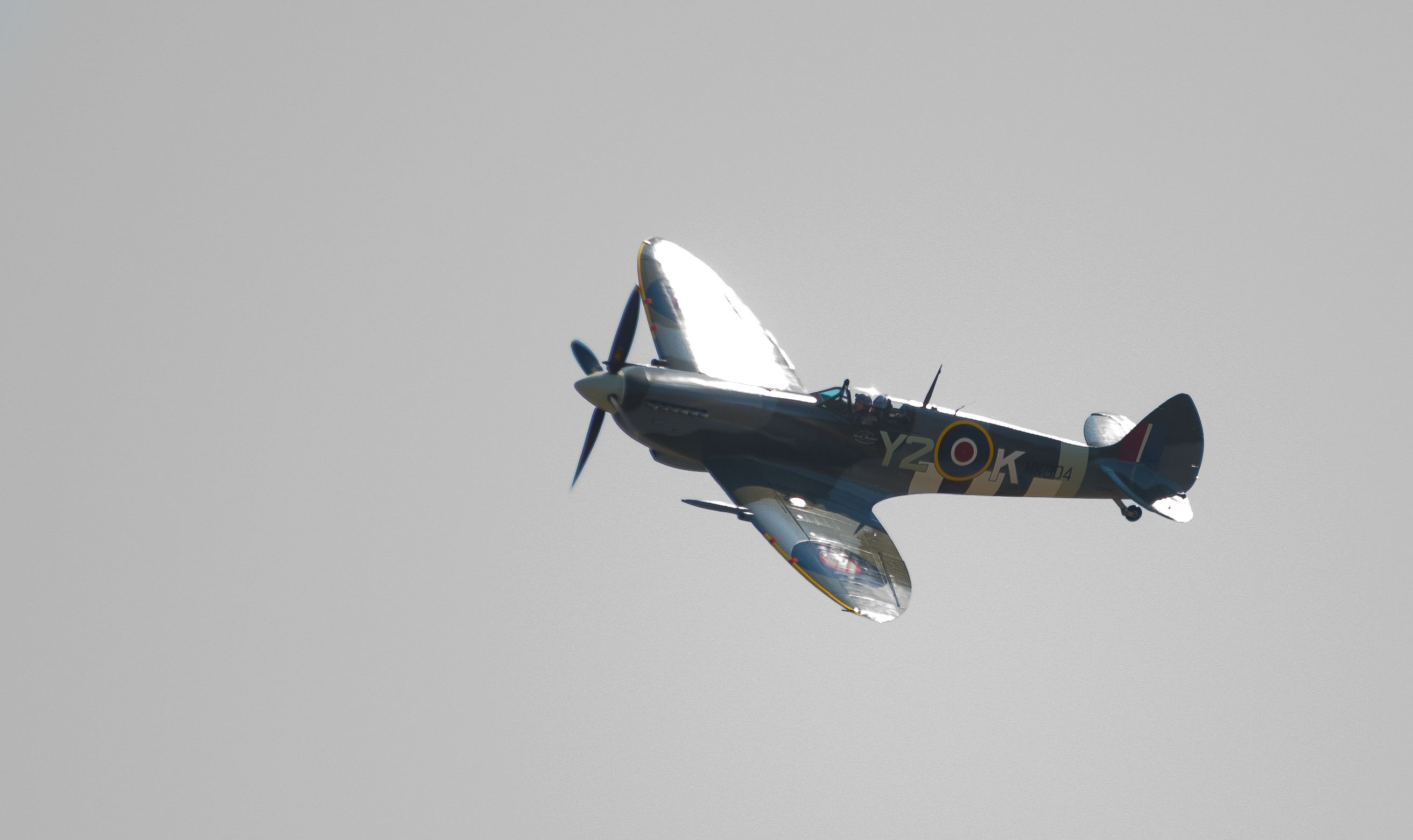 Around 20 years ago, work got underway on the restoration of the Y2K Spitfire in Comox. The warplane has had a long road, starting out as a pile of spare parts in shopping carts, and ending up a finished machine that flew across Canada to land in the Comox Valley on Tuesday.

The parts were first found in South Africa, and were eventually shipped to B.C. In 2000, efforts began to restore the aircraft locally, led by the Comox Air Force Museum. By 2008, the decision was made for Vintage Wings of Canada in Gatineau for full restoration. That process had been ongoing for the past three years.

The 97-year old helped marshal in the Y2K Spitfire for landing at 19 Wing Comox this afternoon, with the plane flown in by Dave Hadfield, brother to Canadian astronaut Chris Hadfield.

Dave had begun his flight in Ottawa back in the middle of July, travelling south to Windsor and on to Oshkosh in the United States, where it won a major trophy for restored warplanes. The journey continued through a series of American airports, in order to avoid bad weather, with the final flight into Comox taking off from the United States. 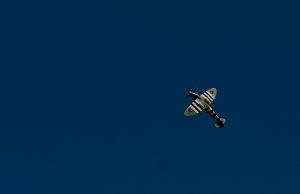 The restored Y2K Spitfire flies over 19 Wing Comox on July 31st, 2018. The aircraft was piloted by Dave Hadfield, on a flight across Canada. Photo by James Wood/98.9 The Goat/Vista Radio

Customs officials met the plane on the tarmac at 19 Wing Comox, followed by a small crowd of military personnel and dignitaries involved in the restoration process. Dave spoke to reporters about the flight after greeting Edwards, and completing his discussion with customs.

“It’s a wonderful pleasure, an honour for me.”

He said it was a pleasure to see Edwards guide in the plane, and said it had been a “wonderful plane” to fly.

“When you talk to the old guys who flew it in WWII, they have a reverent tone,” said Hadfield.

“Sometimes there’s sadness, as they think of all the friends that they lost, but when they start talking about the airplane itself, there is a respect and reverence in their voice, and now that I’ve flown it, I get that.” 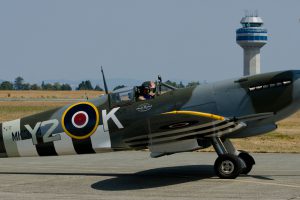 Edwards told reporters that Hadfield “looked like Jimmy Stewart” in his flight suit, and that it was wonderful to have the Spitfire back in Comox.

“I’m trying to get as excited as I can. There are just piles of memories, from everywhere. Africa, Italy, Germany, England, and you can times that by 20 or so. I’ve always enjoyed flying the Spitfire. I feel right at home. Most people do. It’s like the mother aircraft, it looks after you.”

During his flight into 19 Wing Comox, Hadfield did a brief circuit over the Valley. He passed over Courtenay, Comox, and the Comox harbour.

“I think it’s important to show the citizens that the Spitfire has arrived,” said Hadfield.

Despite his advanced years, Edwards could still hear the distinctive sound of the Spitfire as it approached the base this afternoon.

“There’s no engine that sounds like a Spitfire,” he said. 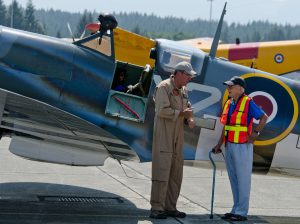 Jon Ambler, a retired colonel, former commander at 19 Wing, and program manager over at the air museum, said he was “absolutely choked up” when he saw the plane flying.

“In a way, it was like the passing of a baton,” said Ambler.

“In a relay race, if someone gets tired, they’ll pass it to the next and they’ll continue the race. We ran with it for nine years, and in nine years progress was made. This is a remarkably complex, difficult, and expensive process. In 2009 we took the baton, and handed it over to Vintage Wings, and they delivered.”

He compared to a poem by Robert Service.

“(Service) said ‘A promise made is a debt unpaid’ and everybody that gave any penny towards the Y2K restoration, that promise was made to them,” said Ambler.

“Today, my tiny part, I’m proud to say we paid that debt today. A remarkable accomplishment.”

A gala dinner will be held on the weekend at the base, featuring the plane and Edwards, with the goal of raising money towards the Stocky Edwards Legacy Trust.

Ambler said that the fund will be aimed at providing scholarships for young people seeking to enter the world of aviation.

“This will give them a chance forward, which is looking after our youth in an aviation theme,” said Ambler.

“This is exactly the kind of person that Stocky is, he sees that as a great way forward, and we’re going to work hard on living up to his legacy.”

MAIN IMAGE CAPTION: The restored Y2K Spitfire flies over 19 Wing Comox on July 31st, 2018. The aircraft was piloted by Dave Hadfield, on a flight across Canada. Photo by James Wood/98.9 The Goat/Vista Radio