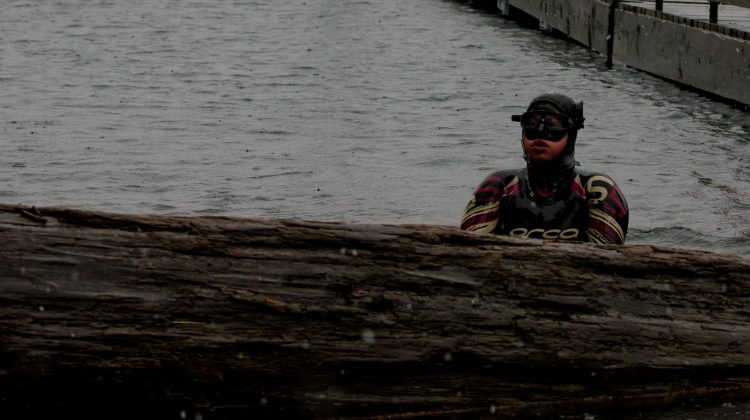 CUMBERLAND, B.C. – The weather isn’t particularly nice for swimming, with a wind warning in effect and lots of rain in the forecast.

However, that didn’t stop Oyster River swimmer Magali Côté from traversing Comox Lake. Côté started at the west end of the Comox Valley-area lake, beneath the glacier, and swam to the Cumberland side boat launch.

She said it was quite the journey.

“I feel cold, a little chilly,” she said following the swim.

She noted that she started the 10-kilometre swim at around 9:00 a.m.

“I was doing good when I was crossing, but it was windy and choppy and kind of hard to swim in there,” she said.

“Once I reached the other (south) side of the lake, it became easier to swim, but I was tired and already cold.”

She explained that she was more sheltered, and the waters weren’t as choppy in the final stretch of the swim.

“I think I wasted a lot of time crossing the lake to get to the south side, so I ran out of time, and (her crew) had to pick me up, give me a ride a little bit further,” she said.

“Unfortunately I didn’t do the whole thing, but I jumped back in the water to finish it at least. I was shaking but I was like ‘no, I’ve got to finish it!’”

Côté said she brought some hot water to keep herself hydrated.

She noted that she’d like to make the swim a tradition, and possibly swim Comox Lake again, or try a different body of water.

“It’s quite challenging already just to swim in the water, but everybody from the Comox Valley knows that even swimming in the summer, in the Comox Lake, is challenging, so winter conditions add a lot of difficulties to that swim,” she said.

If she were to swim the lake again, Côté she would plan things a little differently, and give herself more time to complete the challenge.

“It feels good, I’m ready for a huge bowl of pasta,” she said with a laugh, following the excursion.

FOR A GOOD CAUSE

The swimmer said she wasn’t just swimming for the fun of it, but was raising funds for the Comox Valley Food Bank.

“It’s phenomenal. I don’t think I’d be out there doing it but I’m glad she was able to have a swim, and be successful,” said food bank president Jeff Hampton.

Leigh Campbell, director at large with the food bank, said that Côté is one of the strongest women that she knows. “Both physically and mentally to endure that type of thing, this is what she loves to do, and we’re just thankful that she chose us to be a part of it all,” Campbell said.

Côté said she is very thankful for all the support she received and for the people that came to watch her swim, and cheer her on in the process.

She also thanked her boyfriend Thomas Hearty and her friend Dylan Ball for accompanying her on the Zodiac, and asked for residents to be careful with their garbage after encountering litter in the lake near the swim area and boat launch.

-With files from James Wood