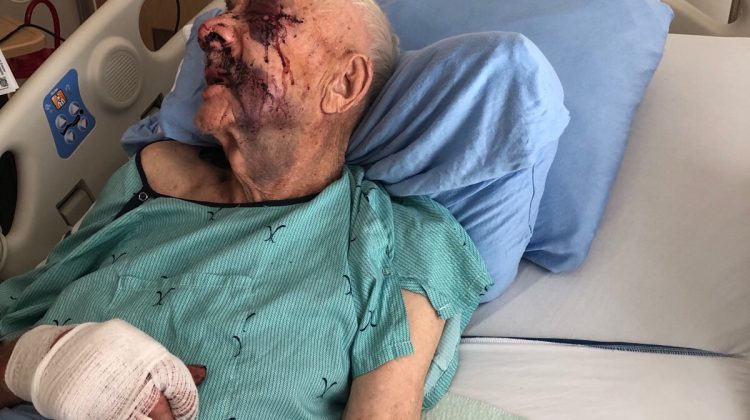 An 89-year-old man was a victim of a machete attack early Wednesday morning. (supplied by Bob's Recovery GoFundMe page)

The victim of a machete attack in downtown Courtenay is in danger of losing the sight in his left eye.

That’s the latest update from Janelle Karatsikis who started a GoFundMe page to help the 89-year-old victim.

The senior named Bob was approached early Wednesday morning by a man on a bicycle who asked him for a cigarette.

For no reason, the suspect then attacked him with what appeared to be a machete.

“He’s going to need another plastic surgery tonight. They’re trying to work on his left eye but the chances of him seeing again are slim to none.”

Karatsikis said through it all, Bob remains in great spirits.

“That helps us to laugh and joke with him,” Karatsikis said.

“Almost losing his eye doesn’t seem to faze him but when such an inhuman activity/tragedy occurs like this, it’s hard to think that everyone is good in the world and then the outpouring of support that we’ve had on social media and through the GoFundMe has just restored our faith in the community of the Comox Valley and the island in general for just being what it is.”

As of Thursday night, the GoFundMe page was up to more than $21, 000 that will go towardsBob’s medical recovery, both physically and mentally.

Karatsikis said Bob and his family are overwhelmed by the support.

“Bob’s emotional, we’re emotional just to see all the love and support cause he has a heart of gold and he would give the shirt off his back to anybody. He’s just one of the most amazing people that we know.”

‘Grandpa Bob’ is family to Karatsikis.

“Bob met my grandma about 17 years ago,” she said. “They both lived on the same street and they connected when I was living with my grandma, and they’ve been companions/partners for the last 17 years, living together. He helped care for my grandma in the last stages of her dementia.”

Karatsikis’s grandma passed away in May.

“Bob has been nothing but good to us. He’s family to us and we’re family to him.”

Meanwhile, Karatsikis added that Bob is “pretty fragile” and hasn’t had much in his life “but he’s still a giver.”

“He could use any help that he could get,” she said.