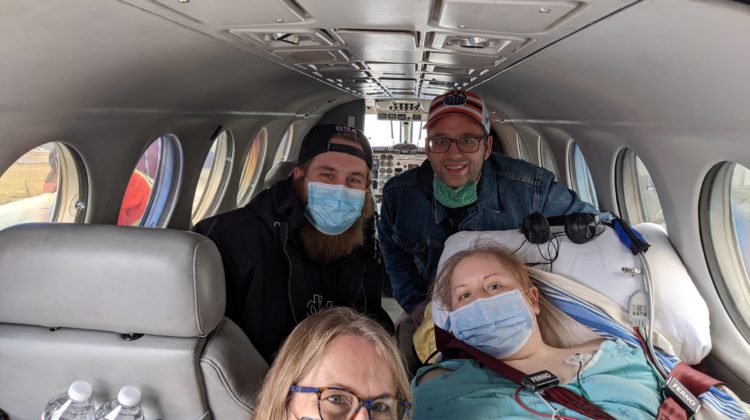 People, including total strangers, have rallied around Lisa, who has cancer and is now palliative.

She was going to school in Winnipeg and wanted to spend her remaining weeks with family and friends in her hometown of Campbell River.

With help from an organization called Global Angel Charity, Lisa’s loved ones, including her husband Christopher, met their fundraising goal to bring her home.

Thousands of dollars were raised over a short period of time, allowing Lisa to fly to B.C. from Winnipeg via air ambulance, which isn’t covered by insurance.

“We had a fundraising goal and an amazing team of family and community people that have helped us get to… I think we topped out at $28,000, and we had a family team, here, working to get that price down and at some point, it was almost like, ‘let’s make a deal’ and what we had was adequate, and it was struck, and we said, ‘let’s go,’ and things started to roll and we made it happen.”

The flight included a pit stop and a surprise visit.

“So on the way home we were facing some headwinds, and we were on a very small little plane,” Christopher explained.

“And we had to stop for gas. It happened that it was in Calgary, we had a little bit of notice, and the Life Support staff said, ‘Why don’t you get (Lisa’s) brother here? We have about 20 minutes and we’ll get him on the plane and we’ll have a visit.”

“On short notice, on Thanksgiving, we brought her brother down, and they sat and had about a 20 minute face-to-face, right on the plane. So there’s me, and Lisa’s mom, and her brother and we had a little Thanksgiving moment, right then and there,” Christopher said. 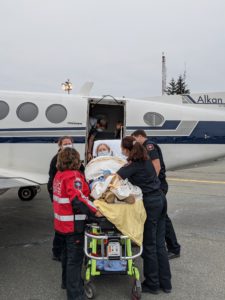 As they got off the plane, they were welcomed by Lisa’s dad and about 50 others.

But the support didn’t end there. As they made their way to Campbell River Hospital, Chris said people lined the streets “like a marathon” clapping and cheering for Lisa.

“It was a marathon to get home in so many ways, and to have people along that last little leg was special, too.”

It was a good and very happy trip, Christopher said: “Hundreds and hundreds – and maybe even thousands – of people came together to make this trip happen. We can’t say thank you enough to the Life Support people who transported us, and Alkan Air that transported us, and the receiving party on this side.”

“So if I can say thank you to all those people who contributed in any little way then, from the bottom of our heart… thank you.”

Back in 2016, Lisa was diagnosed with stage three/four Non-Hodgkin’s Follicular Lymphoma. This diagnosis came during her second year as a Human Nutrition Sciences student. However, her diagnosis didn’t slow her down as she completed her degree, graduating with honours in June 2019.

In December of last year, while working as an unpaid dietetic intern, Lisa developed a major clot in her leg which meant putting her internship on hold and starting chemotherapy treatment.

Her treatments began this past January, and on July 27th she toasted to six months’ treatment complete.

In the very same week, as she completed her Follicular Lymphoma treatment, Lisa felt off, and some strange new symptoms appeared.

It turned out she had a new, unrelated, rare and aggressive brain cancer. Lisa’s doctors reminded her that she, like this cancer, was a rare and unique case, and they believed a cure was possible.

Unfortunately, Lisa suffered significant complications, and her doctor felt it was time to shift care to palliative measures.

When they learned that Lisa would not survive, she and Chris got married in the hospital chapel, with their family in B.C. joining them via Zoom.

“Wanting to be home is something that resonates with everybody, and we want to be home,” Christopher adds.