A west coast wildlife photographer is sharing a super pod experience in the ocean waters north of Campbell River.

Liron Gertsman is a UBC biology student who not only shoots wildlife photography, but also teaches it.

On Aug. 31st, Gertsman was on a tour with Campbell River Whale Watching when they came across a pod of roughly 300 Pacific white-sided dolphins. 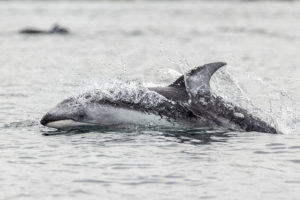 “There had been dolphins seen in the area recently so with that in mind, we were keeping an eye out for dolphins that had been seen on previous days in that area,” he shared.

Gertsman has been on numerous whale watching boats over his 15 years photography career and said this was a rare and awesome spectacle.

“This was actually only the second time I’ve seen Pacific white sided dolphins. They’re not necessarily rare, they’re around, they can just not always be guaranteed to see on a whale watching vessel, especially since we’re off looking for things like orcas and humpback whales so it was very exciting.”

Gertsman said it was great to see such a huge group of dolphins.

“There were like, 300 of them and they seemed to be having a good time, super active, lots of breaching out of the water, lots of feeding, which is always great to see.”

He couldn’t say how long the encounter lasted because he was so caught up in the moment.

“It was like, ‘Wow, this is incredible.’ I’m not sure how long it was, maybe an hour, that sort of thing, but it was just incredible. I was in awe. I’ve never really encountered something quite like this before, where you have hundreds of animals, all around you, all really, really active and when we got back to the dock at the end of the day, there were people who said this was a once-in-a-lifetime experience, and I feel the same way,” he said. “I feel the same way because those once-in-a-lifetime experiences are so special.”

You can find the photos on his Instagram page.